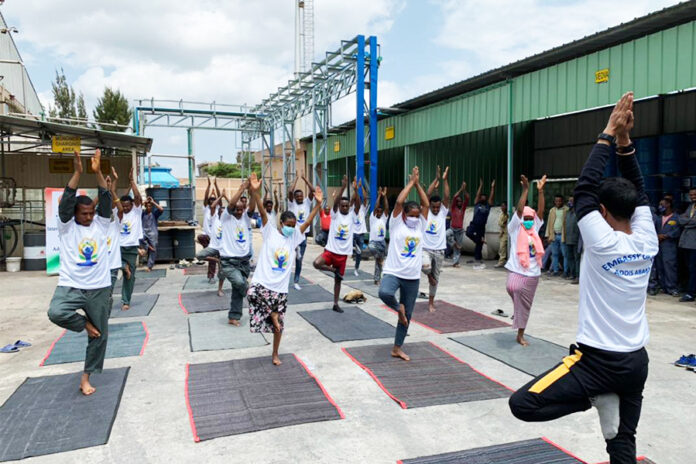 Across the nation, Ethiopians stretched their muscles and tested their flexibility while celebrating International Yoga day on Monday, June 21.
Other than India itself, Ethiopia held the highest number of yoga events in the world, according to Indian Ambassador to Ethiopia, Robert Shetkintong.
Over 100 yoga events were held in cities across Ethiopia, including 26 universities, 50 factories, and the famous Unity Park in Addis. The Embassy of India also held a seminar on yoga and its benefits. A yoga teacher from Ethiopia, Mahlet Sebsibe, also held a demonstration session.
“Yoga is good for physical as well as mental health. It helps an individual to unite with her/his inner strength and protects us from all negativities,” stated the press release about the celebration.
International Yoga Day was established December 11, 2014 after the United Nations, including both Ethiopia and India, unanimously adopted a resolution to observe the holiday on June 21 every year.
Yoga is an ancient and traditional practice in India, with ties to both Hinduism and Buddhism. It involves sets of positions, different meditation and relaxation techniques, and breathing exercises. It has become a popular form of exercise around the world.