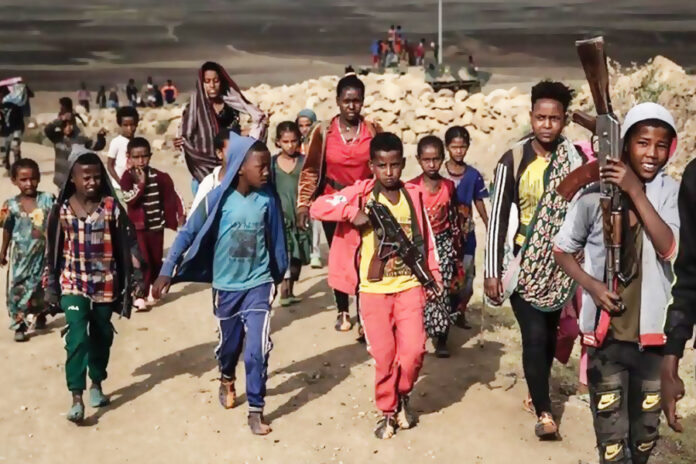 The Ethiopian Human Rights Commission (EHRC) is investigating the reports related with child soldiers which are being deployed by the TPLF group in the war front after receiving reports.
Beside its attack on civilians living in the neighboring region, the TPLF is deploying children to the battle front, as reports shows.;w Multiple pictures going viral among Ethiopians in social media indicates that the Tigray People’s Liberation Front is extensively using child soldiers in the battle against the Ethiopian Defense Force and Amhara region forces.
Earlier this week, the TPLF launched an extensive military campaign in the Afar region, although, the TPLF was unable to prevail in the Afar region and continue a military offensive. It has suffered a crushing defeat in Alele Sulula area of the Afar region. A force called May Day has been deployed according to government report deploying child soldiers in the front as well. However, the TPLF forces were defeated, and several child soldiers were captured.
“The TPLF is forcing children to get in the war by giving them about three days of trainings, and is also collecting bodies of the children killed in the fights to spread its propaganda,” says the national defense force.
Also the government expressed that the leaders of the TPLF group are ordering not to give aids for families that didn’t sent their children to the fight.
Expertise working on the human rights says that role of children taking direct part in war bears serious implications for their physical and emotional well-being. They are commonly subject to abuse and most of them witness death, killing, and sexual violence. Many are forced to commit violent acts and some suffer serious long-term psychological consequences. The reintegration of these children into civilian life is an essential part of the work to help child soldiers rebuild their lives and is often a long road to fully recovery
In Ethiopia the minimum age for military service is 18 and although such service was not compulsory, there had been “credible” reports that lots of teenagers had been forcibly recruited into the army, especially during preparations for the offensive. Also Recruiting and using children under the age of 15 as soldiers is prohibited under international humanitarian law, treaty and custom, and is defined as a war crime by the International Criminal Court.
Although the International Community has been calling for an end to the conflict and resorting to political dialogue to resolve the dispute between the Federal government and TPLF, they are however quiet about TPLF using child soldiers in battles, government blamed. Prime Minister Abiy Ahmed also accused the international community of the silence about the TPLF recruitment of child soldiers.
Aron Masho, public relation director at EHRC told capital that, the commission is investigating the situation based on reports the commission has received. “Since the commission follows up human rights violation, we are working to find out what the situation is,” said Aron, adding that so far there is no completed report.