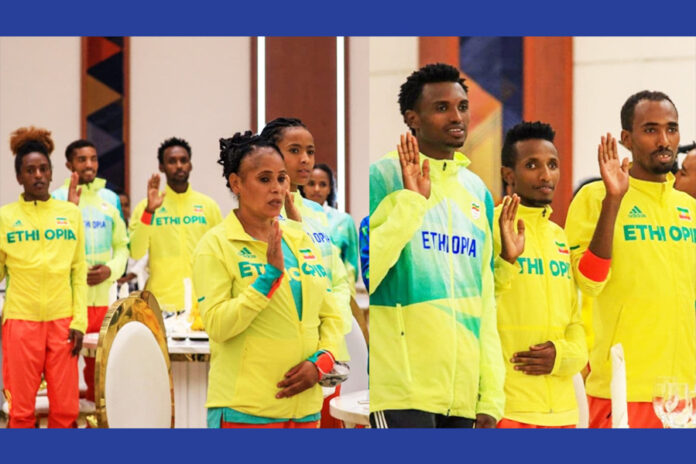 Nibret Melak, 21, has been dreaming of shining at the Olympics ever since he saw his childhood idol and Ethiopia’s running great Kenenisa Bekele run at the 2012 London Summer Olympics on a television screen.
Melak, who will be competing in the 5,000m athletics event at the upcoming Tokyo Olympics, carries the hopes of millions of people in Africa’s second-most populous nation.
The Tokyo Summer Olympics, delayed for a year due to the COVID-19 pandemic, is scheduled to be held from July 23 to August 8.
“I am aiming for a gold like what the Ethiopian people expect me to get. I hope I have done a good preparation to represent my country on the winners’ podium,” Melak told Xinhua recently.
Melak expects tough competition from Kenyan, Ugandan and Eritrean athletes as well as his countrymen at the Olympics.
The young athlete was inspired by Ethiopia’s athletics legend and Beijing Olympics gold medalist – Kenenisa Bekele.
Ethiopia has over the years won multiple Olympic medals at long-distance events such as the 5,000m, 10,000m and marathon.
Unlike in the past, the East African country aims to achieve rare Olympic medals in middle-distance athletics events.
One such athlete is Abraham Sime, 19, a 3,000m steeplechase runner, aiming to be in the medals in an athletics field usually dominated by athletes from Ethiopia’s neighbor Kenya.
“Ethiopian coaches normally focus on 5,000m and 10,000m athletics events, with the 3,000m steeplechase field normally dominated by Kenyans,” said Sime.
“But there is no reason why we won’t get medal results if we work hard on it, just like 5,000m and 10,000m athletics fields,” he further said.
Like many other athletes worldwide, Sime’s Summer Olympics preparation was nearly derailed by the outbreak of the COVID-19 pandemic, but the support he received from the Ethiopia Athletics Federation in the last seven months has helped him stay motivated to compete in Tokyo Olympics.
“The COVID-19 pandemic had a negative impact on my preparation as many athletics tournaments were canceled, but the federation gave us good support in the last seven months,” said Sime.
Ethiopia will send an all-time high number of athletes to the Tokyo Olympics, with 34 athletes expected to compete from 800m up to marathon. The first Ethiopian athletics team will fly to Tokyo on July 24.
Hussein Shibo, 5,000m and 10,000m coach and overall coordinator for Ethiopia coaches at Tokyo 2020, stressed that what makes sports events exciting is unpredictability.
Shibo hopes the Ethiopian athletes will win medals in every athletics event they participate in the Tokyo Olympics.
“We have prepared our athletes, not only physically but also psychologically and tactically,” he said. “We expect tough competition from the likes of Kenya, Uganda and Eritrea with their star athletes.”
“We are aspiring to get gold, if not silver or bronze, in every event that our athletes are participating,” Shibo stressed, also affirming the importance of scientific and tactical training given to athletes in order to achieve the national aspiration.
Ethiopia’s Letesenbet Gidey, 5,000- and 10,000-meters female world record holder, is expected to face tough competition from 5,000m road race world record holder Sifan Hassen of the Netherlands and Hellen Obiri of Kenya.
In the 10,000m, Yomif Kejelecha of Ethiopia, currently an indoor mile world record holder, is expected to face competition from the likes of Geoffrey Kamworor from Kenya.