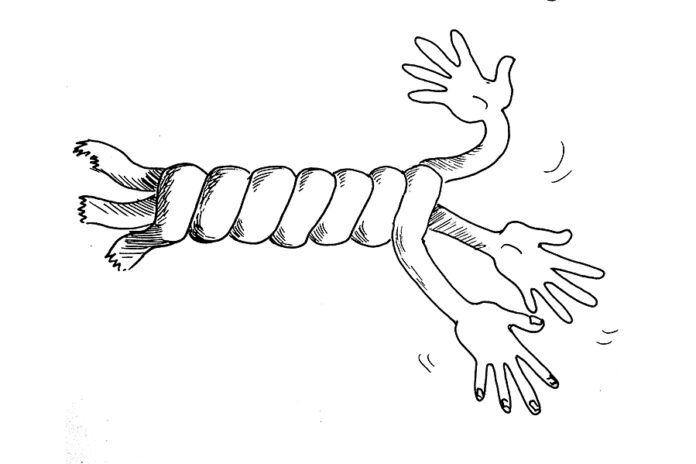 To those seriously interested in the whole spectrum of human affairs, (not excluding our interaction with ‘Mother Nature’) the current systemic/structural crises have become truly frightening. Unsafe imbalances tend to dominate the operations of the various global institutions. Many of the interactions in the various sectors of collective human existence; politics, economics, etc., are not only superficial and fake, but are also precariously fragile. The economic domain of the world order, which anchors all other institutions, (more or less) is unstable. The slightest perturbation within this dominant sector is bound to cause major disruptions across the world. Unfortunately and like before, (the 2008 financial crisis, etc.) the global sheeple (human mass) is intentionally misled about the prevailing concrete reality. Instead of facts and the bitter truth, the sheeple is fed lies, lies and statistics. Frivolous news and numbing entertainment are aggressively used to detract the global masses from important issues!
As we never tire of repeating, the global economy, which is fixated on continuous growth, is an epitome of stupidity. Further exasperating the situation brought about by this nonsense is the monetary system that underpins the global economic regime. Whichever way one cuts it, modern finance is built on massive fraud and it is this fraudulent activity that is accelerating the demise of the world system! Like many things in life, the current crises of modern finance emanate from internal as well as external challenges. The continuous printing of money out of thin air has distorted the very rule of the game. Those connected to the money spigot become immensely rich, (way beyond compensatory rewards for their efforts), while the working stiffs continue to lose ground. The lopsided income distribution, particularly since the 2008 financial crisis, is a very clear example of what finance is capable of doing. If truth be told, modern finance has single handedly redefined what capitalism is all about.. Understandably, the Davos crowd is now very worried. These operators know that the whole scheme is a scam, and without this con game most of their supposed wealth (unearned) will just vanish into thin air, whence it came! At the end of the day, real wealth is derived, directly or indirectly, from the systemic disfranchising of the global sheeple’s labor. The Davos bunches are masters at cleverly employing various manipulative technics to have their ways. Wrongly educating the masses as well as their minions to unquestioningly accept the status quo, hence their own subjugation is one such scheme.
The other agenda item in the Davos jamboree is how to save global finance from ascending informatics. The onslaught brought about by modern informatics in finance, particularly in the area of currency is scaring bankers and the central banking system. The two evils existing banking/financial system depend on, namely; hierarchical centralization and non-transparency, are being challenged by the emerging crypto currencies! All cryptos, almost without exception, (exceptions are those being concocted by the banksters/states) are working to get rid of these two evils of the prevailing global financial regime. Again, this moves is scaring the daylight out of the manipulative cliques, at the service of monopoly capital. Naturally many of the global states are genuinely confused about cryptos and where they are heading. On one hand, those who have not been profiting immensely from the current arrangement (peripheral countries) want financial regime change. On the other hand, the core countries want to maintain their hold of the system to that they can continue to milk the poor in their countries as well as abroad. What would ultimately prevail in the long run is anybody’s guess. To be sure, there are many problems and difficulties associated with cryptos that need to be solved before cryptos become fully useable. Some states are meticulously working to come up with cryptos that will help change the existing fraudulent banking system!
In the mean time the global sheeple is becoming angrier by the day, hence ‘populism.’ If things don’t improve significantly and soon, what follows might well be interactions involving pitchforks, guillotines and machetes! In fact, one of the major agenda item in Davos is how to deal with the rising ‘populism’ worldwide. Davosians have figured out that ‘populism’ will pose serious challenges to their ongoing accumulation process. ‘Populism’, whether of the right or left inclination, might not tolerate the current polarized existence. Various initiatives to seriously undermine the reigning economic regime is already underway by forward articulators and activists. Alarming resource shortages and visible environmental degradation cannot inspire long term confidence in the system, however much one is brainwashed. The ‘knowledgeable’ elites, particularly those who have major stakes in the global status quo, have chosen to be part of the problem instead of trying to become part of the solution. Sadly, the large majority of the learned is sufficiently brainwashed by establishment institutions, (including the paid and state media) to be of much help in devising needed alternatives.