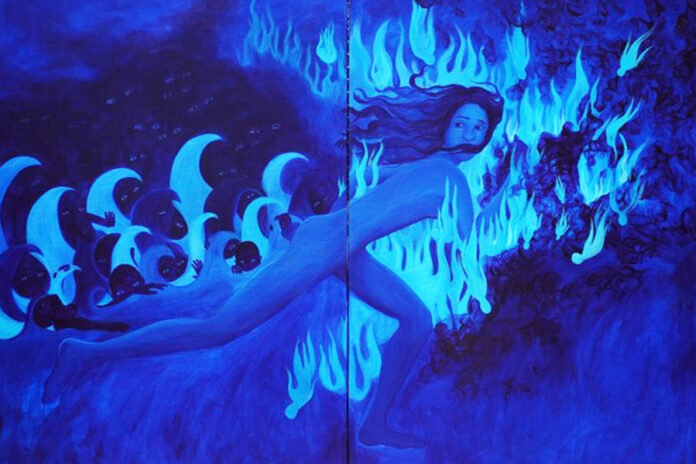 An intergenerational group exhibition, From Modern to Contemporary: Artists from the Horn of Africa and Diaspora (10 June–17 August 2021) at the independent art space CFHILL in Stockholm marks the first Scandinavian showcase of artists from this region.

This collaboration with London and Addis Ababa-based Addis Fine Art continues CFHILL’s commitment to offering an exhibition platform to international curators, artists, and galleries. Works by 19 artists including sculpture, painting, textiles, video, and photography are shown in five main galleries across two floors, highlighting important artists of Ethiopian, Eritrean, and Sudanese descent spanning the modern era to the present. Among them are two modern masters, and the first graduates of the Allé School of Fine Arts and Design at Addis Ababa University, the oldest art school in East Africa: Lulseged Retta and Tadesse Mesfin, who is also a long-time Allé educator. 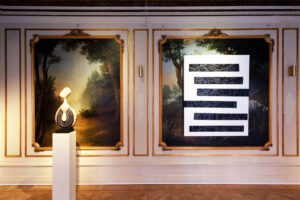 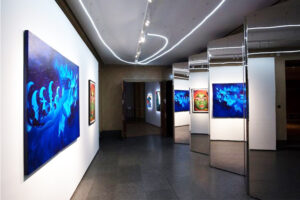 In one of the ground-floor galleries, Ethiopian-American artist Tsedaye Makonnen’s totemic, pillar-like light emitting sculpture Senait & Nahom, The Peacemaker & The Comforter I (2019) is in conversation with the artist’s Astral Sea IV (2019), a deep blue cape adorned with hundreds of laser-cut mirror pieces drawing from Ethiopian Coptic cross motifs.
The cloak is activated when worn by Tsedaye in her performance art, which is a total body of work that explores the transhistorical forced migrations of Black people globally. The cape faces Tariku Shiferaw’s Sky Walker (Miguel) (2021), a densely layered painting of thick, differently coloured bars against a sky-blue ground.
In the final thematic section ‘Emerging Artists’, a new guard of exciting female artists living in the continent and as part of the diaspora range from Selome Muleta’s figurative explorations of femininity and intimacy; Tizta Berhanu’s abstract renderings of emotive gestures; and Yasmeen Abdullah’s humanistic depictions influenced by the poetry of Mahmoud Darwish.
A standout presentation is the grouping of works by Adiskidan Ambaye, Daniela Yohannes, Atong Atem, and Selome Muleta, which creates a compelling space of intimacy, with representations eliciting imaginations of the future.
Muleta’s photographic acrylic and oil pastel portrait Tsédal XXI (2021) is drawn from the artist’s series that depicts women in her life posing inside fictive interiors; while Yohannes’ Ontological Terror (2021) meditates on alternative and mythological Black realities through the vision of a nude, light blue female figure in flight, surrounded by blue flames against a deep blue, dreamlike landscape.
Ambaye, the only other sculptor on view alongside Makonnen, is a welcome inclusion with contorted wooden sculptures created from gestural drawings. Liberty (2019) and Queen of Sheba (2020) appear as if they were moulded from a single block but are composed of handcrafted smaller slices of plywood fused to form the whole, the surface carefully sanded and smoothed by the artist. Ambaye likens this process to the way an eraser rids drawings of errors while sketching.
The curatorial thesis adopted by the exhibition’s organisers, Addis Fine Art’s co-founders, Rakeb Sile and Mesai Haileleul, situates the nuances, interconnectedness, and cultural specificities pertinent to artists from this part of the continent. ‘Africa is a complex and diverse continent’, they note. ‘The term “African art” is often used as a shorthand for art produced in certain regions of a continent of over a billion people.’
They add: ‘Regional specificity matters, hence why we decided to group the Horn of Africa for this exhibition as each country that makes up this part of the continent shares certain ethnic, religious, and cultural similarities.’
Ethiopia presents a compelling case in exploring nuances of the region due to its unique history as a country that was never colonised but was occupied by Italy for approximately five years, developing a counternarrative to the singular view of modernism coming to the continent through colonial contact.
East Africans in particular Somalis and Eritreans are among Sweden’s largest immigrant communities. From Modern to Contemporary does not stake a claim as the definitive overview of artists working in this region or its diaspora; rather, it offers long-overdue insight on key developments in the region and across its diaspora over 50 years.
Organisers hope the show will resonate with the sizable East African population in Stockholm to see themselves, their culture, and their beliefs represented. ‘We are excited to hear feedback from members of this community on the exhibition,’ say Sile and Haileleul.
Co-organiser and CFHILL’s co-founder Michael Elmenbeck adds: ‘Eritreans are one of the largest diaspora groups of Africa descendant in Sweden, and if we can showcase cultural objects that so many are able to connect to in different ways, the exhibition has fulfilled its purpose.’
The result is a cross-temporal presentation that eschews definitive conclusions in order to open up starting points for further research, critical reflections, and interest in art from the Horn of Africa. It is an exciting proposition that one hopes will contribute not only to developing communities, but to the developing histories of East African art, opening up a deserved critical perspective on the region.