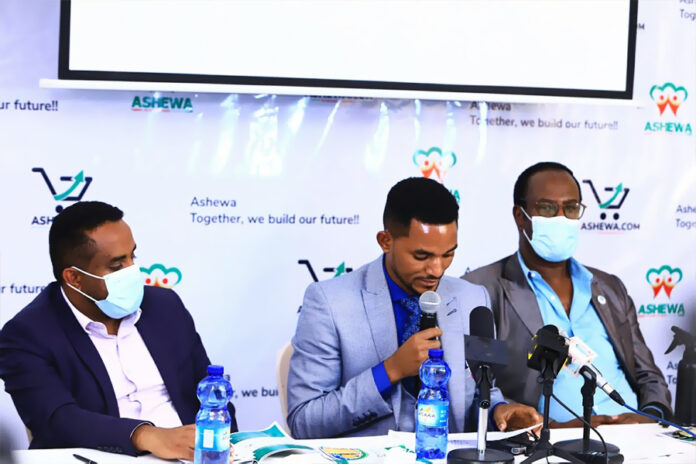 Ashewa Technology Solution SC, the upcoming ecommerce and learning firm, announces it will allocate ten percent of its capital for digital development and innovation. Ethio Telecom complements by saying it has come with a platform ready to boost digital business.
The Addis Ababa Science and Technology Agency has promised that it will closely align with technology companies on the aim to attain the government strong policy on digital economy and to tap an opportunity for job creation.
Since the government disclosed that it has given supportive attention for digital economy development and technology improvement several companies and individuals are joining the sector to contribute their share on the sector, which is never properly exploited in Ethiopia.
One of the companies’ targets to boost the development is Ashewa that secured a license to be involved in 11 digital development industries.
On the press conference held in Getfam Hotel on Tuesday July 27, the company officials disclosed that at the initial stage the ecommerce platform will officially start its operation by Tuesday August 10 and the e-learning will follow its own path on the second stage.
Daniel Bekele, CEO of Ashewa, said that the company commenced its activity ambitiously to do business on internet besides political activism and entertainment purpose that is currently observed in Ethiopia. 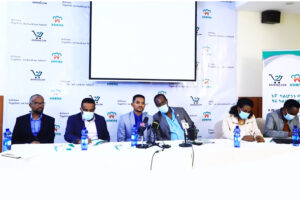 “There are about 25 million citizens, mainly, the youth have access to internet in Ethiopia, while we are yet to make it a source of income like other countries including those who are similar with Ethiopian standard,” he says, adding that, “that should be changed and we have to do business and create jobs for millions by only using internet for development and economic purpose.”
The company that sold shares for interested shareholders for the past six months to generate of the target 25 million birr has fully attained it and now it has revised its mission to obtain 200 million birr within a short period.
Daniel told Capital that of the 200 million birr, the 20 million birr will be allocated for innovation, technology development and related operation to come up with compatible platforms for Ethiopian market. The company has also a plan not only in using the innovated technologies for itself but make it a source of income by providing for others.
On Tuesday’s ceremony, representative from Ethio Telecom, Job Creation Commission (JCC) and other relevant offices had attended the event.
Mekbib Woldehana, Deputy Head of Addis Ababa Science and Technology Agency, said that as per the government’s strong policy direction, the agency will closely collaborate with companies like Ashewa on technology development.
At the press conference Mohamed Ahmed, who represents Ethio Telecom, said that such kind of businesses were not unable to mushroom in Ethiopia because of weak digital payment schemes, while there was interest in the country. He said that Ethio Telecom has created conducive environment for this now.
“Now we have solved this gap and introduce modern payment scheme, ‘telebirr’ that enabled to includes 7 million subscribers in just two months.”
Mohamed said that Ethio Telecom has fully prepared to work with companies like Ashewa to achieve their business without any obstacle on the digital payment.
Alemtsehay Dersolegn, Deputy Commissioner of JCC, said that reaching to this stage is a big success by itself, and expressed her desire to see the required success of the company. The company has aimed to create millions of jobs in connection with the digital system.
Ashewa has already hired engineers on the sector and it will expand to maximize the technology development and innovation.
According to the plan, the company targets to invest the 160 million birr for the e-commerce platform that will mainly targets to encourage businesses like producers, wholesalers and small and medium enterprises.
“We encourage source of traders like producers on the aim to create direct linkage with consumers that is also contributed to easy the price and the public to enjoy from affordable rate,” Daniel explained.
While companies and traders shall come up with genuine products and images with standard quality, they shall also use the platform to promote their business online and trade at the same time.
Similar to Ashewa other companies from abroad and local are also coming on the ecommerce and other online platforms to do business on the innovation sector that is now dominating the globe.