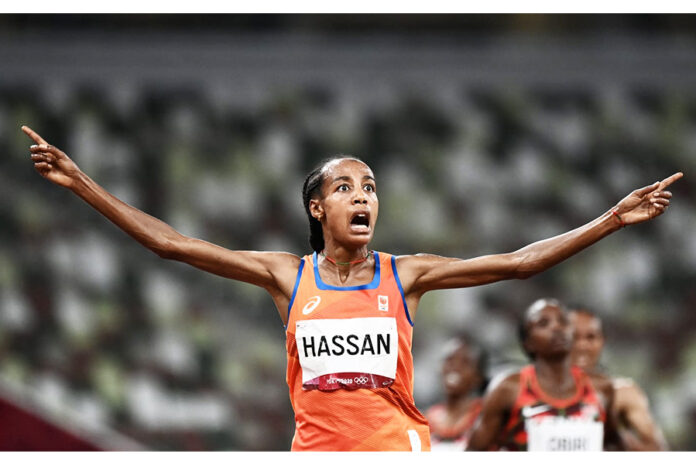 On Saturday 7 August, the Dutchwoman Sifan Hassan won the gold medal in the 10,000m, her third of the week after gold in the 5,000m and bronze in the 1,500m. Ethiopian world record holder Letesenbet Gidey finished third on the podium behind another Ethiopian-born cross-country skier.
Ethiopian-born Dutchwoman Sifan Hassan won her third medal of the Tokyo Olympics, dominating the 10,000m, after gold in the 5,000m and bronze in the 1,500m.
Despite the unfavorable weather conditions on Saturday (heat, humidity), the Dutchwoman let her main opponent, world record holder Letesenbet Gidey, held the reins for a long time in the 10,000m, before turning the tables in the last 200m.
With a supple stride and a steady pace, the Ethiopian swallowed the track, clocking in under 3′ (over 20 km/h). Behind her, all the girls lost contact one by one, until only the Bahraini Kalkidan Gezahegne and Hassan were left.
Kalkidan Gezahegne from Ethiopia wins Olympic silver
Despite this consistency, Gidey did not manage to get rid of her two pursuers. The Ethiopian even broke down in the last few meters before the finish line and only finished third in the race, after starting so well.
In the end, the highest step of the podium went to the insatiable Sifan Hassan who, thanks to her speed and resilience in her sixth race in a week, still had the legs to win the gold (29’55”32) ahead of Gezahegne (29’56”18) and Gidey (30’01”72).
The Dutchwoman thus dominates a podium with Ethiopian roots. Hassan grew up in the East African country before arriving as a refugee in the Netherlands in 2008 at the age of 15. Gezahegne was also a runner for Ethiopia before being naturalized by Bahrain in 2013.
A great achievement. At 28, Sifan Hassan has managed to win an improbable collection, but not without fatigue. Indeed, for the first time during the week, she had to catch her breath under a tent of the organization, asking for water to cool down.