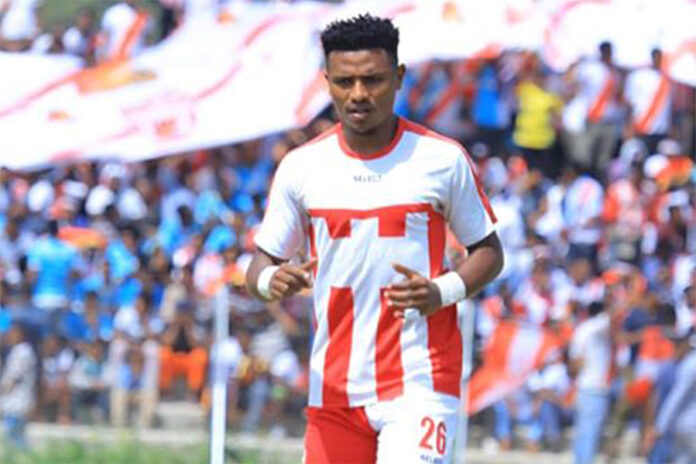 Champions Fasil Ketema top prize player Mujib Kasim has finalized his historic move to Algerian side JS Kabyle. “It is a dream come true signing to such a giant club” Mujib told reporters.
Top scorer of 2021 Ethiopian Premier League season runner-up Mujib’s move to the Algerian side is as good as done for the striker signing a three year contract. Twenty goals in 23 appearances this season Mujib led the Gondor based Fasil Ketema to its first ever championship title. Not only a deadly goal hunter at club level but his contribution in helping Ethiopia qualify to African Cup after eight years is what made him the most sought after player in Ethiopian top league.
Though he was under contract with Fasil, the 14 times Algerian champions did everything to sign the striker who finally secured his release after mutual agreement.
The USD Ten Million worth JSK,the flagship of the historic Barber speaking region Kabyle is currently 7th in the 20 clubs Algerian top league boasting Mujib their fourth foreign footballer next to a Libyan, French and Canadian.
According to close sources to the club Mujib’s request was initially denied by the champions that are preparing for their maiden African Champions League campaign. But considering his huge contribution in helping the side win the league title and his ambition to play at professional level, finally the club decided to see him off with a blessing from officials as well supporters.