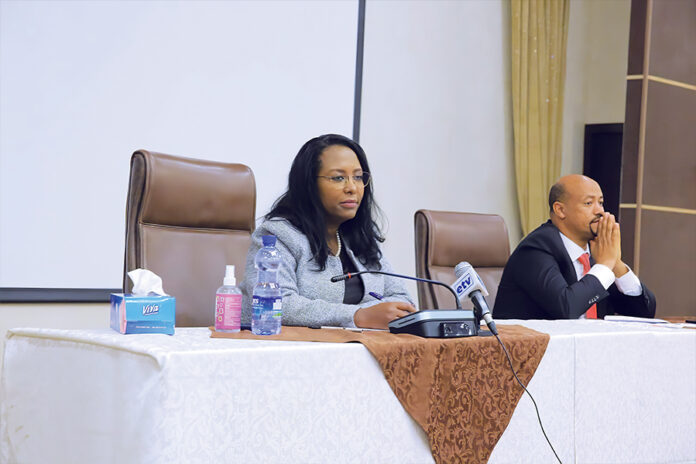 Deputy Mayor Adanech Abeibe and Addis Ababa Trade Bureau Director Abdulfeta Yesuf were engaged in consultative discussions with the business community on the reasons for the high cost of living in the city. Hundreds of businesses’ representatives of the business community participated on the meeting held on August 21, 2021 at Elilly International Hotel.
The Addis Ababa City Administration Trade Bureau said that it is working to increase supply in goods especially on agricultural production. As Abdulfeta said there has not been massive observed shortages of supply in the city while greedy traders are trying to destabilize the market and reduce the cost of living by creating economic fraud by hoarding goods. However to reduce inflation and shortage of goods in the market the bureau expressed that it is thoroughly working on this. 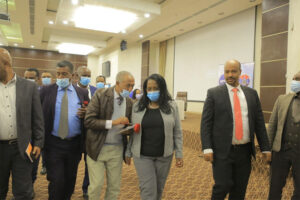 Further raising certain issues regarding the price hike and inflation, traders have asked the trade bureau to set a price book with defined limit of price points. To that regard, the trade bureau has said it will consider setting a maximum price to regulate the market in a way that fosters competition and protects the interest of consumers.
The deputy mayor called on the business community to help in taking top control by handing over greedy traders who in an effort to take advantage of the current national situation create a shortage of products in the market which leads to increase in prices which ultimately leads to engagements in illegal activities.
In recent time, the price hike has been seen on food items, manufacture items and house hold goods. For instance, teff, wheat and rice have been showing a 10percent jump in the capital in under a month. However, the traders suggested that due to certain involvements that the city administrations have made in the last few months, the prices have been showing a slight decrease.
Prices for table salt jumped up to 20 birr a kilogram last week, around a third higher than the going rate earlier this month as the city administration suspend 3 distributers. Salt traders blame the price surge on the interruption of transport services as war spills over into Afar Regional State, which is the source of almost all of the country’s salt, while government officials claim it is the result of market speculation and misinformation.
The bureau is taking different measurement to control price hikers, said Abdulfeta adding that until now 80 traders have been taken to court.
As the Mayor said, the city administration has launched a task force which will be set up to monitor and control the market.