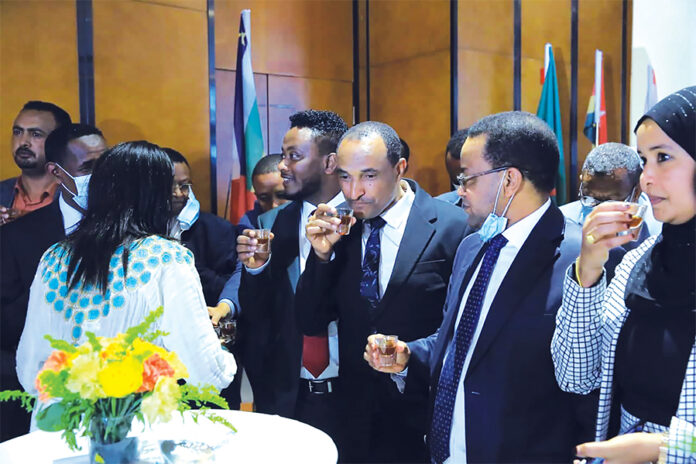 Ethiopia recognizes winners of Cup of Excellence (CoE) Ethiopia 2021. This year’s competition, which is the second, has blazed to register different records in the cupping industry similar to last year.
On the CoE Ethiopia 2021 a record number of 1,849 coffee samples were submitted from all coffee-growing areas of Ethiopia in February 2021. After three rounds of cupping, the 40 coffees with a quality score of 85+ entered the final international jury round, which was held in six different labs in the US, Japan, South Korea, Australia, China, and Norway. 30 coffees scoring 87+ became the Cup of Excellence Ethiopia 2021 winners. Out of the 30, five coffees scored 90+ and received the highest recognition in the competition, known as the Presidential Award.
For the year, Tamiru Tadesse, who competed with Sidama coffee, took the Presidential Award.
On July 7, 2021, 180 registered buyers bid online for 9 hours to buy the 30 coffees. This year’s CoE Ethiopia also set a new record with an average price of USD 32.12 per pound and with total proceeds of USD 1.96 million, which is a record for the Cup of Excellence competition globally.
The winning coffee was sold at an online auction for USD 330/ per kilogram to Saza Coffee of Tokyo, Japan. The winner Tamiru also had a second lot of coffee that took 5th place in the competition and was sold for USD 57 per kilogram to Sarutahiko Coffee Inc., which is also from Tokyo, Japan. This year’s competition also included women winners.
Coffee cupping: far left Tamiru Tadesse, Presidential Award Winner, Adugna Debela, Head of Ethiopian Coffee and Tea Authority, Yinager Dessie, Governor of National Bank of Ethiopia, and Aynalem Nigussie, State Minister of Agriculture