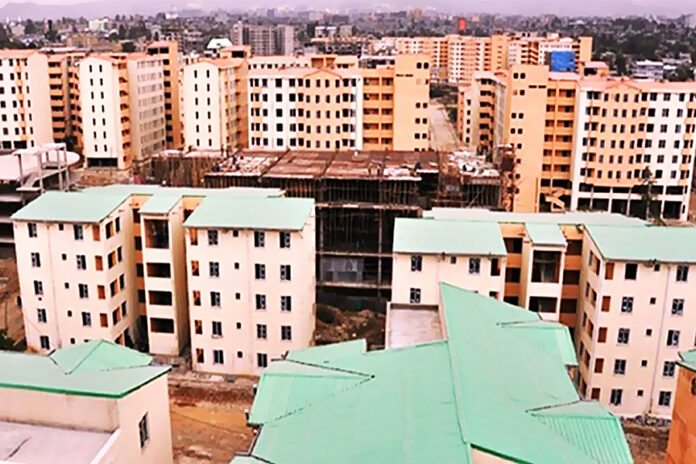 As result of financial problems, Addis Ababa Housing Development and Administration Bureau (AAHDAB) will not have any new projects of condominium housing units both on 20/80 and 40/60 schemes for the year 2014 Ethiopian calendar (2021/22).
The city administration has planned to build 1 million houses in five years until 2018, which is said to be 200,000 houses each year. Accordingly, the bureau has set its plan to start projects of 99,000 condominium housing units in both 20/80 and 40/60 schemes; nevertheless the plan seems to be failing from the start of the year due to lack of finance.
Condos were primarily started off as low-cost, subsidized residential units developed purely for the low-income section of Addis Ababa and as sources tell Capital, the bureau has asked the city administration 89 billion birr budget for the construction of condominium units in the already started budget year, 2021/22. However, the bureau is still waiting for the finance from the administration. Beside the finance set back, the agency has also asked for 512 hectares of plot of land for the projects.
As sources said projects could be started if the bureau gets both the finance and the land, however, as conditions indicates both the finance and space are not available until now thus there will be no new projects to be started this year whereas the whole focus will be completing the already started projects.
Currently, the agency has projects of 139,008 housing units which are under old projects in both 20/80 and 40/60 schemes; from this on March 6, 2019, 51,229 houses were passed to winners. Moreover 28,500 of these have shown good construction progress and 22,000 houses are transferred to residents in special way, and the rest are under construction.
In 2019/20 or 2012 E.C, the bureau had started the project of only 4,287 condominium units, which are on 7.9 percent performance as result of input shortage. According to him based on the plan, the old projects are expected to be completed until the end of the coming December, however some uncertainties including lack of finance and input could make the complication go until the end of the budget year. “We have planned in both ways,” he said.
Since 2005, Ethiopia has been implementing an ambitious government-led low- and middle-income housing program to solve an existing low-cost housing shortage and reduce poverty through housing production. The city administration constructed and transferred 300 thousand houses in the past 16 years.
Perhaps in recent times the city administration has been setting and implementing different alternative strategies to solve the housing problem of the residents including; foreign real estate developers, cooperatives, public private partnership modalities, joint venture, and other new alternatives.
Few months ago the deputy mayor, Adanech Abebe had signed an agreement with South African housing company, Wadi Al Sider Commercial Investment Liability Ltd Company to construct houses to low and middle-income residents of the city. Beside international organizations the housing bureau has also signed an agreement with Gojo Bridge Housing Trading plc to work together on the access to housing in the capital city.
Gojo Bridge Housing has introduced an alternative housing scheme in which dwellers can access a reasonable rate with the support of financial firms and volunteers, who agreed to share their plots for the construction of high rise condos.
On the Gojo’s scheme, dwellers will construct their own house on their direct involvement. Under its model Gojo has planned to construct 100,000 houses in the coming five years. Those who registered at the city administration to construct their houses via cooperatives shall access the plots of land that are available at Gojo sharing scheme.
So far 723 members have registered depositing 253 million birr in different banks planning to have 1050 housing units in the next five years in four sites.