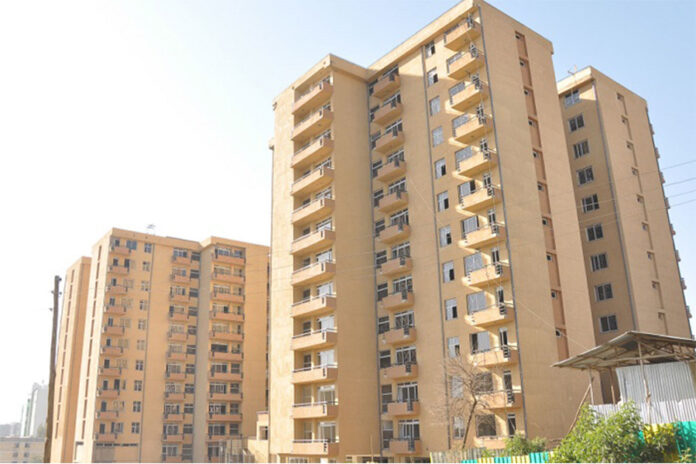 Addis Ababa Housing Development & Administration Bureau (AAHDAB) has received 52 hectare plot of land from the city administration to develop houses under associations. Compensation, replacement and budget have been noted to delay the office from starting the project.
On March 2021, the Bureau had introduced the housing scheme for people who are willing to work in partnership with other home seekers who had registered for 40/60 and 20/80 condominium schemes in 2005 E.C / 2013 G.C.
However according to Kiya Berecha, a senior Civil Engineer at AAHDAB, even if the bureau had received the lease from the city administration it is becoming difficult to start the project as certain issues are hindering the agency.
“Compensation, replacement, lack of finance and also in some areas there are people who are not volunteering to depart,” explains Kiya.
“On the project which is on its precondition will enable residents who have been saving money under the 40/60 and 20/80 condominium schemes but still have not received their homes who are willing to save 70 percent of the price of the housing units and form associations, and to this regard, so far 12,652 people have registered,” Kiya elaborated, adding that the plan is to build 20,400 houses under the scheme to which additional 8000 residents are expected to be registered.
“The bureau is working with the city administration and different stakeholders are trying to solve the problems and to secure the land. Regarding the compensation, the city administration has passed a decision to release budget which we are waiting for the payment,” Kiya explained whilst addressing the progress.
“Currently, the construction designing agency, which is under the housing bureau is engaged in the designing work, and when the designing is complete, the relevant associations will start saving in time. Overall, we are planning to start the project implementation before the completion of the newly started budget year,” Kiya further explained. However, it is clear that the Housing Development and Administration Bureau highly needs the support of the city administration.
Applicants are not allowed to form associations by themselves. Hence, it will be the Bureau which will form the associations among registered applicants. As Kiya revealed, the bureau has completed the software preparation to form the association, and perhaps forming associations will start as soon as the designing is completed.
“After we form the association, the next step will be allocating the land, infrastructure and other supports to housing associations that will build the condominium houses, in five sub-cities. A single block will be overseen by one association,” Kiya explained on the over structure.
Each unit built by the associations is expected to have similar quality based on a standard that will be set by the housing bureau. For instance, a single bedroom is expected to have a width of 60 square meters, 75 square meters for two bedrooms and 105 square meters for three bedrooms. A single housing unit, depending on its size and number of bedrooms, costs between 880,000 Birr and 1.6 million Birr. Members of the housing association cannot sell or reward the house to a third party unless the building is completed.
The City Council of Addis Ababa had passed a decision aimed at enabling registered residents awaiting for condo lots to build houses under associations. The decision came after the city administration had considered housing a problem prevailing the capital. The new initiative aims to address housing demands by registering home buyers and organizing them into associations, which will be provided with land and other infrastructures to construct 20,400 condominium housing units.
Despite registering almost a million residents of Addis Ababa during the launch of the program seven years ago, less than 20 percent were able to get houses through a lottery system. More than a 100,000 have also withdrawn the money they saved out of frustration.