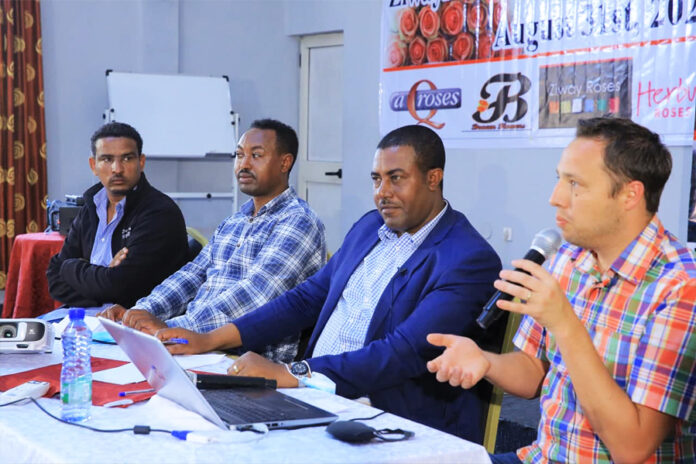 Under the estimation of Batu City Administration about 80,000 households are living in the town. The town located near Lake Dembel/Ziway and the surrounding area at 1,650 meters above sea level is well known for its agriculture activity. The agriculture activity is not only controlled by household farmers as in many areas in the country but also through massive private sector investments including foreign direct investment (FDI).
Vineyard, vegetable and fruit are a pioneer agriculture investment in the area, while the horticulture industry that started to boom about a decade and half is also mainly aligned with Batu.
The prominent and dominant horticulture industry is currently resided for the town since Shar Ethiopia that is now called Afriflora Shar started its greenhouse based floriculture investment in 2005.
Currently, the farm manages five producers including Shar who export their roses mainly to European market and infrequently to Asia.
Ermias Solomon, Operational Manager of Ziway Roses and Chair of the four roses farm companies that possessed greenhouse from Shar, said that that the flower that are produced and exported from Batu takes 60 percent of export volume and the hard currency generation that the country earns every year. 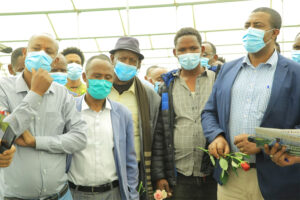 He said that the farms located at the same compound are applying all modern technologies and knowhow to expand production and manage any probable effects on the environment.
So far the facility at Batu that covers over 500 hectares of land is the major source of job in the town.
Gossa Tsegaye, Mayor of Batu, told Capital that Shar and other farms in the greenhouses are the major source of revenue for the town, “for instance in the ended budget year the city administration earns 205 million birr tax of which 79 million birr is secured through the flower companies.”
Currently, the farm have created direct job for over 17, 000 dwellers in the town and 80 percent of them is secured by women.
The Mayor said that the indirect job that the farm creates is very huge that shows such kind of investment shall create decent jobs for the youth.
Ermias said that the farm that is about 163 km south east of Addis Ababa, which is a hub to export the fresh produce via Bole International Airport said that besides job and revenue for the town and the country including the foreign currency, which now seats at third position with over USD 531 million after coffee and gold in the ended budget year, knowledge transfer is the biggest success seen because of the modern investment.
Local farmers have got lessons from farms in terms of modern farming activities and have applied it to their farms, “It is a big success for me as technology transfer.”
According to sector experts, besides knowledge transfer to the local farmers, now most of Ethiopian horticulture business particularly in Batu and the surrounding are replacing the expats with local professionals.
When the investment commenced about 16 years ago, top positions have been fully controlled by foreign experts that came from Europe, India or Kenya. “But now all the five farms except two or three individuals are fully managed and controlled by Ethiopians.”
“For instance, if you come to Zeway Roses the management is fully controlled by Ethiopians; it is almost similar in other four farms. We Ethiopians, fully controlled the operation for over three years now, which shows that the knowledge transfer is successfully attained in the farms,” the Operational Manager explained the success in terms of skill development in the sector.
CSR
The farm is closely working with the community in the area. He reminded that in related with corporate social responsibility (CSR) it is involved from the inception of its investment in the area.
To mitigate the inflationary challenge at the farm companies have provided subsidized basic commodities to employees.
Farms have also requested the City Administration to undertake a beautification and greenery project on the heart of the town.
“Meanwhile, the rural community which is living on the lakeside who travel very long periods to fetch water and drink for their cattle; has led to initiatives to commence water drilling at a well in Qemo Gerbi,” farm leaders said.
Community leaders and Aba Gedas are working to connect the farms with community that is seen when distraction occurred in the area with damages of different properties, “the farm that creates huge job for the community and contributes for corporate social responsibility have been saved by the community.”
Since the political reform occurred about three years ago, 270 youths that came with 8 groups have been hired by the farms to supply different goods and services and providing compost for farms. Initially the youths do not have any experience on the business, due to that farms have been engaged on providing trainings.
“For the past three years we have transacted 50 million birr with these groups.”
In the past, the farm has constructed Schools, hospital and other facilities, “meanwhile we have provided massive CSR. We understand that the CSRs were not demand driven. Due to that now we have changed our approach and we will be led by the community demand,” Ermias explained.
On the ‘Open Greenhouse Day’ that was organized by Ethiopian Horticulture Producers Exporters Association held on August 31, farms visitors, who came from the City Administration and Community Leaders (Aba Geda), clarified about the activity of farms regarding operation, safety measures and environmental concerns mainly that is related with water discharge onto Lake Dembel.
Farm leaders said that as far as the safety measures, companies are very alert and rules and precondition are properly held in related with the operation, “for the water use at the farm we have modern recycling facility and zero discharge to the lake.”
Currently, farms have a demand to expand their business if the city administration provides the plot.
Mayor of Batu responded that if formal request come from the farms, the administration will consider that since they are playing a crucial role for the country and local area economic and social aspects.
AQ Roses, Ziway Roses, Braam Flowers, and Herburgs Roses are the four growers besides Shar at Batu, while share has also 165 hectare of farm at Tulu Dimtu, which is five km to south from Batu.
At Batu greenhouse the four farms; AQ Roses, Ziway Roses, Braam Flowers, and Herburgs Roses in total use 144 hectares for production, and Afriflora Shar is controls 265 hectare.