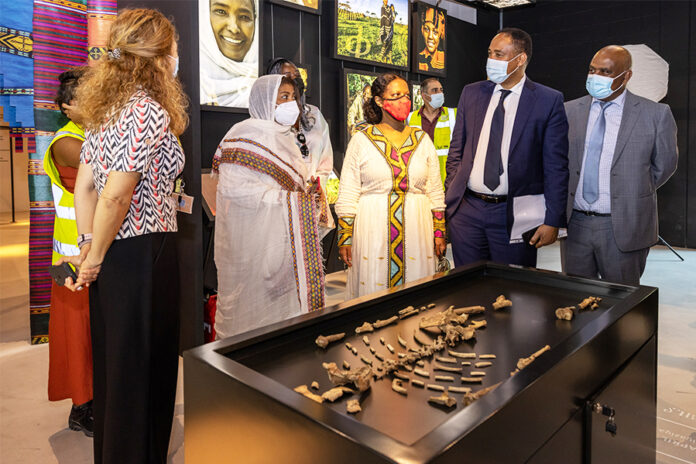 Believed to be the origin of humankind, Ethiopia will spotlight Lucy, the oldest human fossil ever discovered and a major discovery in the country’s history, at Expo 2020 Dubai.

The master cast, which is the star attraction within the Ethiopia Pavilion, reinforces the country’s excellent bilateral relations with the UAE Government, and the cooperation and collaboration of its participation in the first World Expo ever held in the Middle East, Africa and South Asia.

At 3.2-million-years-old, Lucy – locally named “Dinknesh” meaning ‘you are amazing’ in Amharic language – is believed to be the oldest fossil skeleton of a human ancestor ever found after being discovered in the most north-eastern part of Ethiopia in 1974.

Overseeing her installation at the centre of the Ethiopia Pavilion on 26 August was a group of high-level delegates, led by His Excellency Ambassador Misganu Arga, State Minister of Trade & Industry, and Commissioner General of Ethiopia at Expo 2020 Dubai.

Lucy will be exhibited in the Ethiopia Pavilion for the 182 days of Expo, providing visitors with an opportunity to meet and greet their oldest ever ancestor.

Ethiopia is as old as time itself. Humanity started there. As the only sub-Saharan African country never to be colonised, it has successfully maintained its originality, culture and values – all factors that guide it today.

The country led efforts to decolonise Africa to empower the continent and is today a living hub – driving and facilitating connections between the continent and the world. These connections are deep-rooted, formed from the beginning and nurtured through a united vision and good leadership.