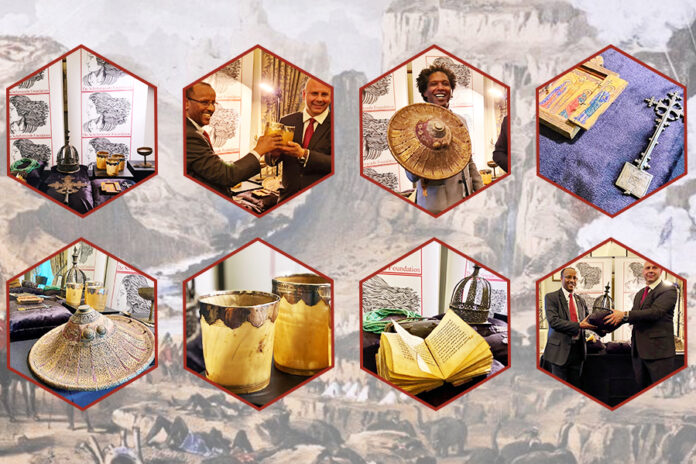 Ethiopian artifacts looted during the Battle of Maqdala in 1868 are to be returned to Ethiopia, Ministry of Foreign Affairs revealed.
Ministry of Foreign Affairs, in a press release, stated that the looted Ethiopian artifacts to be returned Ethiopia thanks to The Scheherazade Foundation, who purchased the items through a UK-based auction house and private dealers.
Speaking on the occasion at a reception held at The Athenaeum Club, Ethiopian Ambassador to UK, Teferi Melesse thanked The Scheherazade Foundation for their work in acquiring the precious items and renewed calls for museums, collectors and holders of Maqdala 1868 heritages to return them to Ethiopia.
The Scheherazade Foundation CEO, Tahir Shah said he knew what the return of the objects would mean to Ethiopians. He added that he hopes to build bridges between the two nations through his Foundation.
Alula Pankhurst who is an Ethiopian scholar and social development consultant in his social media account said that the return of the treasures is significant. “The treasure trove of returned looted artefacts by the Scheherazade Foundation to the Ethiopian Ambassador in London at a ceremony at the Athenaeum club in London is the single most significant heritage restitution to Ethiopia both in the number and diversity of the items. These include not just beautiful and symbolic religious artefacts including two crosses, an archbishop’s crown, an icon, psalms of King David and magic scroll, but also a magnificent shield, three unusually large horn beakers, as well as copies and illustrations of letters and publications contextualizing the Magdala expedition of 1868,” he said.
“We are on the cusp of a ‘restitution age’, where the role of museum as custodians of colonial heritage is being questioned and global relations and history of artefacts are being reinterpreted with the potential to bridge cultures and strengthen relations between institutions, scholars and the public at large across nations – nowhere more so than in the case of Ethiopia and Britain with a long shared history, notably during the last Emperor Haile Sellassie’s exile as a refugee in Bath and the role of British troops in Ethiopia’s liberation from the Fascist Italian occupation,” he continued.
“The British state rightfully returned several artefacts including the manuscript of the Glory of the Kings in the late 19th Century at the request of Emperor Yohannes IV, and a crown during the reign of Empress Zewditu to the Regent Taferi on his visit for King George VI’s coronation in 1937, and Emperor Tewodros’ seal and a crown during Queen Elizabeth Visit to the Ethiopia in 1965. In the late 20th Century and early 21st Century individual descendants of soldiers of Napier’s Magdala expedition did the right thing and returned more than 20 artefacts as gestures of popular goodwill taking up the call of AFROMET, the Association for the Return of the Magdala Ethiopian Treasures, and recently the Imperial War Museum returned a lock of Emperor Tewodros’ hair.”
Alula further said that “the cache of returned artefacts in one go is almost equivalent to all the private collection returns over many years in the late 20th and early 21st century, and may pave the way for further restitutions initiatives; especially at a time when retaining artefacts, notably human remains such as those of Prince Alemayehu in Windsor Chapel or sacred objects such as a the holy Tabot Arks of the Covenant in the British Museum, that it has been agreed never to display is becoming increasingly anachronistic, irrelevant and embarrassing. In stark contrast these and other artefacts have immense historical, cultural and spiritual value in the homeland to which they belong and their return results in jubilation and national pride and immense gratitude that a historical wrong has at last been rectified. It is high time that Britain follows the example of the British people and the most recent trail blazing initiative of the Scheherazade foundation ‘Buying Back Better’ and participating in the growing movement for heritage restitution and building global and bilateral cultural bridges and promoting increase mutual respect, understanding and collaboration.”