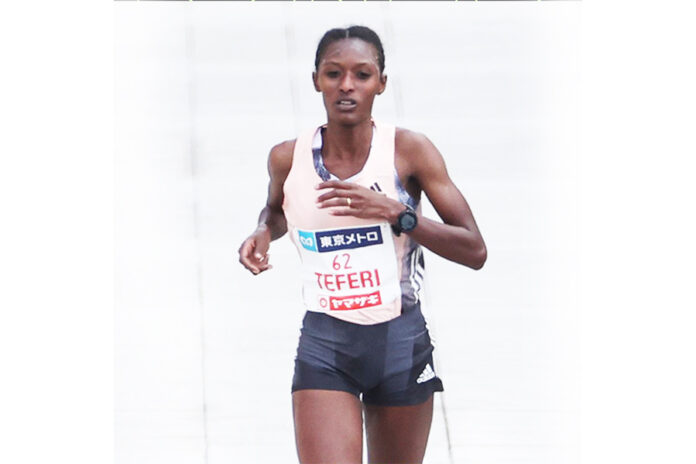 Ethiopia’s Senbere Teferi shattered the world record in the 5K at the Adizero Road to Records running festival in Germany on Sunday, September 12. Senbere broke both the women’s-only record of 14:44, set by Sifan Hassan, and the outright world record of 14:43, run by Beatrice Chepkoech earlier this year.
Senbere clocked 14:29 in a mostly solo effort on the roads surrounding Adidas headquarters. Teferi’s time broke the previous record of 14:43 set by Beatrice Chepkoech in February at the 2021 Monaco Run, and the women’s-only world record of 14:44 set by Sifan Hassan in 2019. She also beat the fastest 5K in history—14:32 set by Joyciline Jepkosgei—before the distance became an official world record event.
The 26-year-old from Ethiopia ran with the field through the first kilometer in 2:57. She pulled away from her competitors around four minutes into the race and continued to distance herself, splitting 5:46 for the first two kilometers. By 4K (11:37), Teferi established a significant gap up front and ultimately reached the finish line 25 seconds ahead of runner-up Melknat Wudu.
Teferi finished sixth in the 5,000 meters in Tokyo, her second appearance at the Olympics. “After the Olympics, I knew I was ready to get this world record but today I did it,” the world championship silver medalist said on the race broadcast. “I’m very happy.”