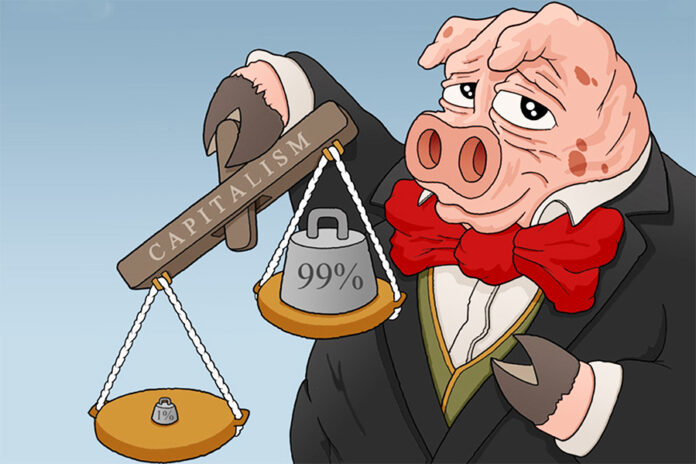 Capitalism as it is theoretically construed and formally thought in the institutions of learning (and elsewhere) is and has always been different from its real life manifestations. As we enter its twilight zone (resource shortages, ecological limits, etc.) the discrepancy is becoming more and more pronounced. In the West where capitalism had developed to maturity, the change looks dramatic, the dysfunctionality frightening! In the early 21st century, capitalism seems to have morphed into crony and casino capitalism. Crony capitalism is the exclusive domain of the connected wealthy, while aspects of casino capitalism is availed to the unsuspecting gullible sheeple. In the words of a Chinese farmer, ‘it is easy to make money from the stock market than from farming.’ The operating word here is ‘easy’, not ‘a lot’, which would have been somewhat understandable!
By crony capitalism, we mean an accumulation process whereby the rigor and vagaries of the market is suspended in favor of pre-arranged operating environment (including capital, land/other resources, even labor) favorably disposed to pre-selected market operators. This version of capitalism is openly facilitated by the powerful ‘deep states’ within the strong, as well as not so strong states. We recall; a ‘deep state’ is a state that is effectively run by the military-intelligence-industrial-banking-media complex, always operating behind the façade of a democratically elected administration. In countries where the public/state sector is the lion’s share of GDP, the phenomenon is phenomenal (OECD)! For instance, the ‘killing industry’, euphemistically called the ‘defense industry’, is now one of the mainstay of deep state economies, large and small. The trickle down effects of such massive state expenditures should not be undermined, particularly their pacifying role in subduing the sheeple’s opposition to the war industry.
By casino capitalism, we mean the finely tuned shearing/slaughtering machine that is put in place, to be used from time to time, (by dominant interests) on the gullible sheeple. Casino capitalism facilitates credit propelled consumption/investments, ranging from the day-to-day purchases of ordinary/unnecessary stuff to the majors, namely, real estate and stocks, as in stock markets. The current global economic growth model is, to a large extent, predicated on these pillars of existing capitalism, or what we call the triple C’s-Crony & Casino Capitalism. We advise; this unsustainable infatuation with money matters will have long term consequences, not always positive or favorable to the gullible global sheeple. China today has more stock market traders (day traders) than communist party members! About a third of these traders (total day traders number about a hundred million strong) pack less formal knowledge than a high school graduate. Our prayers with them! We repeat; the sheeple seems to be eager and ready to commit financial/economic suicide because of ephemeral wealth dangled in front of it by cunning manipulators, who only breath greed! At times the sheeple, not only gets sheared, but can also get slaughtered, as in the case of Greece. Pensions can vanish into the ether, savings can be confiscated, (Cyprus, and coming to places near you) and wages can plummet or even disappear all together (structural unemployment) as in many places around the world, Greece, Ukraine and a lot of places here on our continent!
When various machinations, (like the above fail), the state, on behalf of entrenched interests aggressively intervenes to save CCC. Negative interest rates, quantitative easing, stratosphere leveraging that fuel esoteric ‘financial products’, such as derivatives, etc., are all schemes to salvage the decaying order! We believe, the system is now broken and there won’t be much time left before we start seeing heightened chaos all over! Too big to fail institutions might not be saved, not because of undesirability, on the part of the power that be, but because they are too big to bail! So far none of those who have committed financial crimes that destroyed people’s lives and countries (Greece, etc.) have gone to prisons, as they are too big to jail. At this late our, the efforts of the status quo seems to be only akin to rearranging the deck chairs on the Titanic! Financial cannibalism is how one journalist explained the underlying dynamic of current finance capital. ‘The modern banking system of the last few centuries has been based on lending to borrowers who do something productive with the capital — open a mine, start a factory, start a ranch, drill an oil well. But this whole equation becomes unstuck when — because of a finite resource-constrained planet — there’s nowhere productive to invest it anymore. That’s when finance capital becomes cannibalistic, as it has over the last few decades. That’s why the Greeks, for example, cannot grow themselves out of the debt pit — there’s no growth to be had.’ Arshad Ali.
As we have been saying ad infinitum, the world system that has been around for over half a millennium is in deep crisis and probably has exhausted itself, completely! On the other hand, there seems to be no serious effort, on the part of the status quo, to rethink everything from scratch. Tinkering around the edges is what the ruling elites think will solve the protracted problems of our time. We beg to differ! Blind intransigence, we believe, is not only irrational, but is actually suicidal! From climate change to resource shortages to the increased difficulty of managing complex systems built over time, to the unfolding social chaos; humanity faces formidable challenges, and the Ostrich strategy of burying ones head in the sand cannot solve these humongous problems. If we are not willing to look at our current situation objectively and differently, with a view to changing them profoundly, then we might as well kiss life (as we know it) good-bye. Time is of the essence!