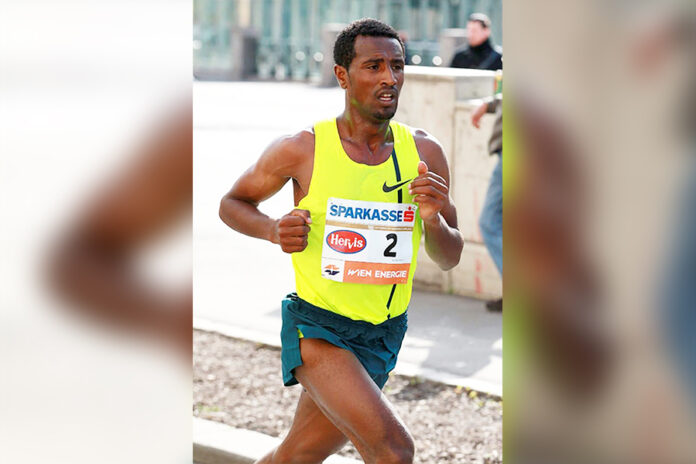 The 30-year-old Ethiopian powered away from a field of astonishing depth with a powerful surge in the closing miles, taking his first ever win at a marathon major in 2:04:01. Kenya’s Vincent Kipchumba took second in 2:04:28, and Ethiopia’s Mosinet Geremew third in 2:04:41.
Sisay had tasted success at marathons many times before–in Warsaw, Vienna, Frankfurt, and Ljubljana–but he’d also endured near-misses at the top tier, with third-place finishes in London, Berlin, and Tokyo. This time around, he wouldn’t be denied.
It was a race that, in many ways, ripped up the form book, with many experts predicting Titus Ekiru of Kenya or Birhanu Legese of Ethiopia, who had both run under 2:03 in the past, would lead the field home.
But Ekiru didn’t even make it to the finish, the Kenyan stepping off the course before 30K, while Legese had nothing left to match the surges up front in the crucial closing miles, the Ethiopian finishing fifth in 2:06:10.
In the Women’s race the 27 year-old 2019 New York City Marathon champion Joycline Jepkosgei collected $ 55000 first-place prize money along with $ 100000 bonus for breaking 2:18:54. Ethiopian Degitu Azmeraw and Ashete Bekere winner had the best days of their careers, both taking more than a minute off their bests and earning $130,000 and $97,500 respectively in prize money and time bonuses.