Ramis Bank, which conducted the founding general assembly that would make it the last entrant in the financial industry under the half a billion birr capital, announces it has already filed its license request for the financial industry supervisory body, National Bank of Ethiopia (NBE).
On the founding assembly that was held on Saturday October 2 at Elilly International Hotel shareholders have elected 13 founding board members.
It was recalled that the central bank ordered the under formation banks to come up with the minimum paid up of 500 million birr in six months time to join the financial sector.
Otherwise the paid up capital requirement will increase by ten fold to five billion birr a day after the deadline.
In April, NBE had revised the minimum paid up capital of the banking industry from 500 million birr to five billion birr. But, under ‘minimum capital requirement for banks: directive no. SBB/78/2021’ it has called banks that are on their formation process to finalize their process with 500 million birr paid capital and request for license until Tuesday October 12.
On it part Ramis, which will involve itself on interest free banking (IFB), stated that it has achieved the process behind the deadline. 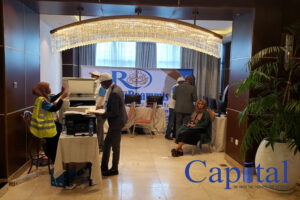 Couple weeks ago Ramis, which got the name from one of the biggest tributary of Wabi Shebele River and one of the largest rivers in eastern Ethiopia, said that it has successfully secured 724 million birr paid up capital to realize its operation.
While achieving on paid up capital is not the last requirement but it need to conduct founding general assembly and elect board members that would be approved by NBE and file its request for the central bank as per the deadline.
Due to that the under formation bank has conducted its general assembly prior to request for a license.
This process may make Ramis to be a last bank that will be formed under 500 million birr paid up capital, meanwhile there are handful banks are struggling to meet the NBE condition.
Capital has informed by organizers of the bank that it has already tabled its license request for NBE on October 6.
Roughly the bank has about 8,000 shareholders.
Ramis that stated it will introduce new IFB products is the third in the exclusive banking sector, which is differ with conventional banking business but become more attractive and even widely favorable for investment financing.
Currently, Zamzam and Hijra are fully IFB banks and have commenced operation in the past fiscal year.