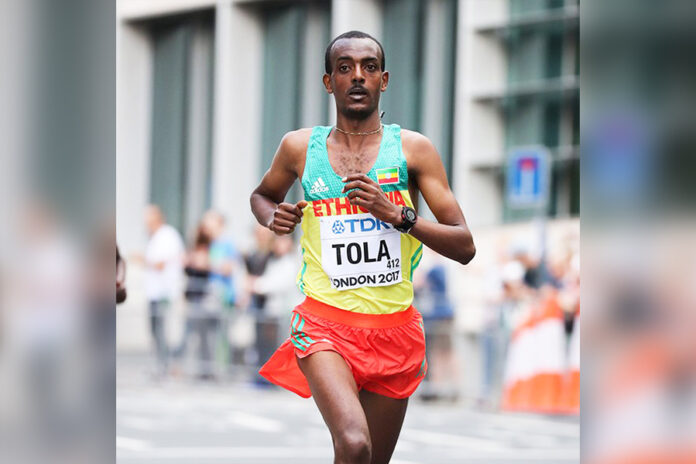 The Amesterdam Marathon saw both its Men’s and Women’s record tumble as Tamerat Tola and Angela Tanui won titles in the Dutch capital. Ethiopia Tola took the lead in the final 2 miles of the race for a time of 2:03.38, beating Kenyan Lawrence Cherono’s previous men’s record. And Tanui’s 2:15:57 topped Degitu Azimerew’s 2019 record.
Tamerat who finished second in the London Marathon in 2017, and bronze in the 10,000m race at Rio 2016 was among six runners left at the end of the race, edging ahead in the final two miles to take the win.
The winning time by the 2017 marathon World Championship silver medalist, improved the previous course record by almost half a minute (2:04:06), while he also moved up seven spots on the world all-time list to 16th.
Meanwhile Kenyan Angella Tanuia late addition to the elite field after her plans to compete in Boston derailed because visa issues, also moved away from the field late to win by more than two minutes, clocking a time of 2:17:57 in the end.
Brenard Koech of Kenya finished second with a time of 2:04:09, while Leul Gebreselasse of Ethiopia rounded out the podium places with a third-place finish with 2:04:12.
That performance eclipsed the previous TSC Amsterdam Marathon course record of 2:19:26 while improving her previous best of 2:20:08, which she set earlier this year in Ampugnano. Kenyan Maureen Chepkemoi ran 2:20:18 for second place, with the podium spots rounded out by Ethiopian Haven Hailu with 2:20:19. Completing the top five were Ethiopian duo Gebeyanesh Ayele (2:21:22) and Worknesh Alemu (2:26:54).