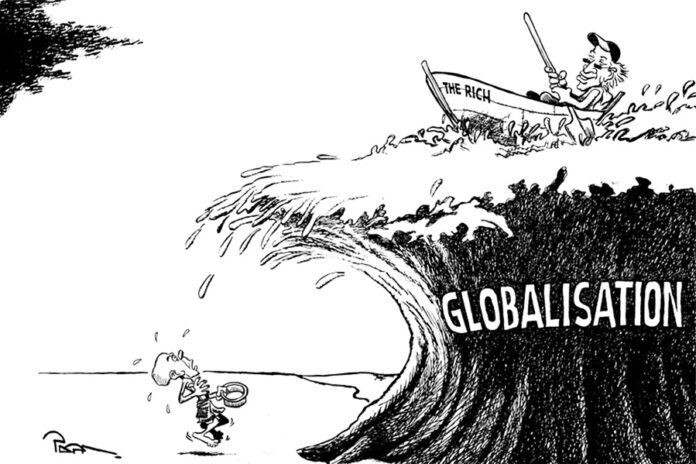 Globalization is not something that is entirely new. We can easily trace it back to the late fourteen hundred, if not earlier. The incorporation of the Americas (1492) into the then global trading system intensified world economic integration. Paradoxically, the resource of the Americas enlarged the scope of globalization, while at the same time ushering its physical limit (the last major frontier). Granted, in those days globalization was not a deeply entrenched phenomenon, both temporally and spatially, but nevertheless, there was extensive trade taking place between regions, including robust trade in human lives as well, slavery. What modernity/technology brought to the global economic system was/is; increased interconnectedness and depth of integration, mostly along the line/logic of capital. The other factor of production, namely labor, remained (relatively) immobile under the ascending globalization. In other words, labor’s usual free movement, relatively speaking, was/is gradually circumscribed by the burgeoning interstate system!
The prevailing complex global infrastructures (physical or otherwise) that were gradually built up with the explicit assumption of abundant/cheap energy and more (inexhaustible biosphere/resources) are currently undergoing severe constrictions. Without these infrastructures, the intense globalization that permeates global life today will unwind at ferocious speed, to the detriment of social peace and stability! As we have been saying all along, complex systems are precarious by nature, hence are vulnerable to the slightest perturbation from within and without. To keep a highly complex system going requires high level of maintenance (continuous energy input) that might not always be available, given the nature of our environment as well as our own very make up. Take the simple example of the Fukushima nuclear power accident. The plant was set up to generate energy for the unrelenting globalized economy of Japan. But human hubris and nature’s fury conspired to render the complex subsystem unworkable. The complex has become, unenviably, the worst nuclear power accident the world has ever seen, propaganda aside! What is even worse, collective techno humanity doesn’t seem to have a clue on how to stop or even mitigate the ongoing unmitigated disaster. As a result, plenty of high-level radiation is continuously entering the biosphere causing cancer, mutation, etc. on all life forms, while the long-term consequences remain unknowably unknown!
Surprisingly, globalization has also brought extreme polarization unseen in centuries past! A couple of hundreds years ago, the degree of inequality between the sheeple (human mass) in the core countries (say UK) and its counterpart in the periphery (like Sub-Saharan Africa) was only three to four folds. Today with all the material, social, technical, etc. achievements, polarization between individuals within a country as well as between nations is frighteningly stark. Measuring inequalities between individuals (using income), for example, say between the USA and Sub-Saharan Africa, one observes the following. A minimum wage earner makes about $25,000 in the US, while a top CEO can garner a salary of $25,000,000 (without adding other benefits), which works out to about a 1000 fold. In the rich countries (OECD) GDP/capita is about $39,000 while average GDP/capita in Sub-Saharan Africa is less than $1500, which translates to over twenty-five fold! Another major indictment of the prevailing polarizing globalization is, its rampant abuse of non-renewable resources. An ordinary meal on a dinner plate of a typical US household has travelled, on average, thousands of miles, utilizing all sorts of non-renewable resources, like fossil fuel, etc.
As we reach the various limits of the ecosystem, scaling back globalization will become imperative. In a nutshell, this is called ‘Localization’ and it entails, amongst other things, the followings. Food must be grown nearby and naturally, in as much as possible. Nonessential travel as well as the unnecessary transport of goods must be severely curtailed, if we are to reduce carbon footprint per capita. Even governance must be increasingly localized to help challenge the current suffocating preponderance of the greed infested transnational corporations. Social relations will also benefit from proximity, if parochialism is kept at bay by enlightening education (not indoctrination) and recollected virtues. Localization can also help recapture our long forgotten human scale, whose (almost complete) absence has encouraged mass psychosis across the board. One cannot talk about the important concept of chronic alienation from which modern wo(man) continues to suffer without giving due credence to the radical philosopher who mercilessly deciphered it at the time of its modern inception. Commodity production (production for exchange rather than for use), rigidly stratified societies, etc. are where alienation (helplessly becoming just a cog in the wheel) started to creep up, according to Karl Marx.
All the above will not come about without determined, principled and protracted struggle against those who perpetuate unsustainability, in all its forms. The prevailing order is out to get those who try to preserve sanity, gun control, environmental protection, etc.! To this end, the order systemically promotes individual as well as institutional (collective) stupidity via its myriad tentacles. Can anyone imagine mass shootings in schools/colleges/churches, etc. without guns?