Goh Betoch Bank SC, the first mortgage financial firm, is officially set to open its door as of tomorrow at its head quarter.
The mortgage bank that received its license from the financial sector supervisory body, National Bank of Ethiopia (NBE), in August is expected to be an alternative source of finance for housing scheme, which usually access less than 10 percent from the total fresh loans in the financial industry.
The information obtained from Goh indicated that the first branch of the bank will be opened on Africa Avenue, Abderuf Building around Japan Embassy starting from October 25 as the 21st bank.
The bank that is also expected to conduct other commercial banking services besides mortgage has targeted to expand its presence at the capital and other cities in the coming months.
At the official license handing over ceremony held mid-August Yinager Dessie, Governor of NBE, promised to back the operation of the first private mortgage bank with supportive policy direction since the operation of the bank is unique from the usual commercial banking activity.
At the ceremony Mulugeta Asmare, founding president of Goh, said that the bank is expected to see some policy changes from the regulatory body and the government in general to attain its target, which is also one of the government top economic development pillars that is mentioned on its ten year economic plan.
Couple months ago Getahun Nanam, Chairperson of Board of Directors of Goh and former Vice Governor of NBE, said that the bank has been in process for three years to realize the dream to become the first mortgage bank in the country.
He said that the housing financing scheme in Ethiopia is very poor despite the demand being very high making the housing issue a top priority.
Getahun cited a study that to ease the current accumulated housing demands, at least 1.2 million houses ought to be built as soon as possible, “besides that every year 100,000 houses have to be constructed to cover fresh demands.”
According to the veteran financial pundit, 70 percent of the existed houses in cities are under standard that actually need reconstruction. 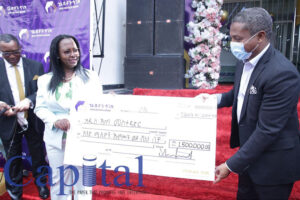 “Meanwhile this is the reality; the existed financial firms are not providing the required fund for the housing and construction sector. Due to that we are formed to fill the gap,” the Board of Directors Chair explained.
According to data from NBE the construction and housing sector has not benefited more than 10 percent of the total loans that banks provide.
“Currently, except the Development Bank of Ethiopia all banks have similar operation and with similar policy but when it comes to Goh, we are coming with different services that need different regulation and policy from the regulatory body,” Mulugeta elaborates, adding, “due to that starting from policy change we need support from NBE to amplify our operation.”
“We want to see preferential treatments on NBE policies like the composition on long term loans portfolio, which is now 20 percent of the total portion of loans and advances for commercial banks, and enable to be partner with foreign fund sources,” Mulugeta, who is well know by his role to register massive success at Bank of Abyssinia as a president, told Capital.
The policy change on the composition of loan portfolio would allow the bank to get huge amount of long term deposit and at the same time provide long term loans that are given for more than five years.
Goh has targeted that the majority share of loans portfolio would be long term.
“There are also opportunities that Goh shall work with international institutions to access and using idle funds to support our mortgage business, due to that on this side also NBE is expected to make consideration,” he explains, while he added that so far the bank would use the current environment for operation.
Mulugeta said that the bank also expects conducive policy environment and other segments of supports from Ministry of Urban Development and Construction and similar public offices in regions and cities to realize the housing solution in the country.
Yinager said that NBE will consider supports for such kind of specialized financial firms, “the country needs different specialized banks besides the existing commercial banking scheme.”
He said that currently, most of the existing banks are financing the commerce, while residential housing problem mainly in urban areas is very high that should be backed by a financing scheme.
Goh includes 6,658 shareholders. Its subscribed capital is 1.056 billion birr of which 521.5 million has been paid up.
Goh is the first after the Housing and Saving Bank (HSB) that was formed by the merger of Imperial Savings and Home Ownership Association and the Savings and Mortgage Corporation of Ethiopia mid 1970 during the Derg period. HSB was also reconstituted to Construction and Business Bank (CBB) in 1994 before it became defunct and merged under the state giant Commercial Bank of Ethiopia in 2016.