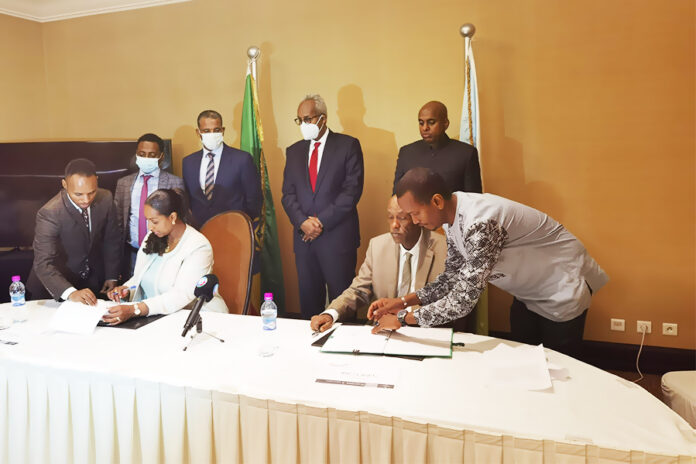 Djibouti and Ethiopia sign an accord for the establishment of a Corridor Management Authority.
A delegation led by Dagmawit Moges, Minister of Transport and Logistics (MoTL) has paid a two day visit to the major port outlet, Djibouti, starting from November 17.
During the visit, the delegation conducted a meeting with Djibouti’s counter parts led by Hassan Houmed Ibrahim, Minister of Infrastructure and Equipment.
On the two-day meeting, Ethiopian ambassador to Djibouti and Djibouti ambassador to Ethiopia were in attendance along with Aboubaker Omar Hadi, Chairperson of Djibouti Ports and Free Zones Authority, and Djama Ibrahim Darar, Head of Port of Djibouti/DMP and other senior teams from two countries.
The information obtained from Djibouti indicated that the meeting mainly focused on a number of issues pertaining to ports, corridor and logistics and reflected the strengthening of the gains made and the means of launching new initiatives.
DPFZA authority stated that the meeting touched on the enhanced performance to better handle this year’s dry bulk campaign expected to reach over 6.6 million tons.
La Nation reported that the meeting not only responds to the desire of the two countries to discuss but also to reflect together on ways and means of strengthening cooperation in the field of transport.
Hassan Houmed on his remark specified that economic and commercial cooperation between Djibouti and Ethiopia maintained a good momentum, with an ever-expanding scope.
“It is no secret that Djibouti and Ethiopia has been, for almost two decades, a model of economic and commercial integration in Africa and we are proud of it. But, we have to be realistic and recognize that the challenges are still great, in line with our ambitions,” he added.
The bilateral meeting was concluded on Thursday, with the adoption of a roadmap for the establishment of a Corridor Management Authority, signed by the two Ministers of Transport.
The port handling in Djibouti has significantly increased in the past few years, while the consignment transporting to Ethiopia is growing with less stay in Djibouti.
The details of the agreement and the exact operation of the upcoming authority are yet to be revealed.