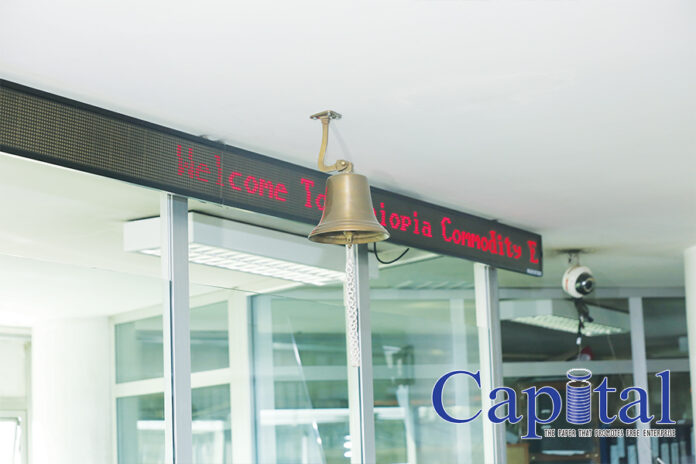 Oromia region decides to incline towards vertical integration trading which has sharply shrunk the coffee product supplied to the electronic trading platform, Ethiopian Commodity Exchange (ECX), Capital has learnt.
It is to be recalled that on its establishment in 2008, ECX had embarked its exclusive trading with coffee and other export commodities followed the path.
However, a couple of years ago the Ethiopian Coffee and Tea Authority (ECTA) introduced vertical integration as an alternative to trade export for coffee besides the electronic trading platform.
The authority has also stated that it has seen success on the new trading scheme in terms of increasing the volume and value from coffee export. It has also said that the scheme has made farmers more to benefit more from the scheme.
Particularly in the past budget year, a significant volume of coffee was exported through vertical integration, a scheme that connected exporters directly to suppliers or farmers rather than a platform facilitated by ECX.
In the five months of the budget year, the coffee export has registered huge achievement to which Adugna Debela, Director General of ECTA, told Capital that the role of vertical integration was significant in attaining the success.
Reliable sources told Capital that the administration in Oromia region has reached a consensus to sell almost all export coffee through vertical integration.
“The regional administration at senior level has decided this year’s harvest to be sold through the new scheme rather than ECX,” a source told Capital.
Based on that, most of the beans which is the major export commodity of Ethiopia which is sourced from Oromia will not trade at ECX.
Sources at ECX have also confirmed that. Sources said that currently the bean that comes from Oromia is mainly specialty or a product that is sold for a local market.
“The volume of coffee that is traded at ECX in the first six months of the current budget year has declined significantly. It shows how the bean that comes from Oromia has dropped,” sources at ECX said.
Oromia is producer of more than three quarter of coffee in the country.
“Currently we are mostly trading coffee which comes from Sidama and West South, the two new regions which split from SNNP, and from Gedio of SNNP,” ECX’s sources added.
Coffee products in the family of Mizan, Tepi, Bench Maji, Yirga Chefe and Sidama are included from those that come from the stated regions above, while small volumes of coffee from other regions like Gambela has also come to the ECX warehouse for export.
However the regional administration passed a decision that almost all export coffee shall be traded outside the ECX, which caused uproar by some of the suppliers. “Some of the suppliers want to trade the product through ECX since they shall get their money immediately when the bean is sold, while on the vertical integration that may not happen,” sources explain.
Some other experts support the decision of Oromia region.
Dawit Tadesse, Assistant Professor and Managing Partner of Lead Plus Consulting, partly supported the decision. “As far as my knowledge, the impact assessments of ECX that show increase for the country, in earnings, production and productivity have not been conducted. Besides that the trading platform was formed on the aim to empower the farmer. Actually it has not benefited farmers since the main actors are suppliers who buy the product from farmers and exporters,” he expressed his argument to Capital.
“There were hypothetical assumptions that farmers shall sell their products on competitive price since they have prices and other relevant information because of the modern trading platform but actually they are still out of the play ground,” a lecturer and business consultant explained.
He said that the new experience that connects farmers to exporters is the latest trend that may benefit farmers.
“Commodity trading systems in other African countries have not been successful, while their governments are not using the trading platforms as mandatory and the only scheme for their agricultural products,” Dawit elaborates, adding, “it is different in Ethiopia. ECX is politically imposed by the government and it is the only trading place for major agricultural export commodities like coffee or sesame.”
“If it was not an exclusive trading place the benefit or failure of ECX would have been seen. I am not stating that ECX is fully defunct. In my view the government must see alternative ways to modify the trading scheme to make farmers benefit more from the scheme,” he concluded.
In related with the out coming of new products, ECX has also introduced several beneficiary schemes to attract suppliers to trade the beans through its trading scheme.
In the first five months of the 2021/22 budget year, the country secured almost double hard currency compared with the same period of last year from coffee export.
Few weeks ago Adugna said that the vertical integration scheme brew success in terms of export earning.
For the current year five months over 133,113 tons of coffee has been exported showing increment of 51,546 tons compared with the preceding year.
ECTA’s projection was that to earn USD 359 million by exporting 108 thousand tons of coffee. However, the actual performance exceeded by 44 percent in terms of revenue that was USD 515 and 23 percent higher in volume.