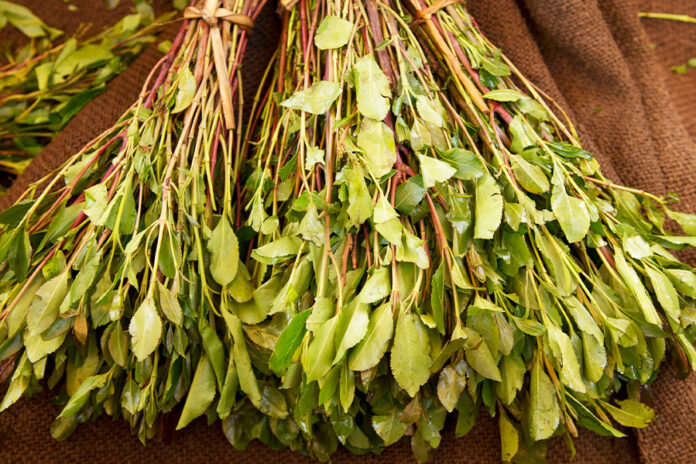 Ethiopia drafts a strategy for one of the major export earning items for the country, khat. After decades in waiting, the stimulant’s export tariff to Somalia market has also faced revision.
On his appearance in parliament whilst presenting his eight months performance, Gebremeskel Chala, Minister of Trade and Regional Integration, said that the ministry in tandem with relevant government bodies is working to improve the khat trading and export earnings.
He explained that changes emplaced in the budget year are improving the sector business.
According to the Minister, the khat trading directive has been in placed for about 41 years with out any change. He said that this made the stimulant leaf traders not to attain the full benefit of the export which consequently reduces the earnings that the country is supposed to secure from the export.
“Experts have since then gathered from different offices in order to identify the problem from the various studies drawing from the identified gaps as result the new trading directive has been developed to boost the khat trading,” he said.
He added that the export trading guideline and action plan have been developed, and it is on due process to be sent to the National Macro-Economic Committee for ratification.
As per the study conducted by experts, the minimum export rate to the Somalia market has been revised from the former and long established five dollar to double that amount.
Starting from January 23, 2022, the new price increments were officially introduced.
According to Gebremeskel, similar to other export commodities, khat is affected by contraband, “Owing to supply deficiency and the rise in contraband, government in conjunction with stakeholders are working to control the illegal activity and improve the benefit from the sector foreign trade.”
Similarly, the Oromia region has also embarked on an initiative to benefit the khat farmers, rather than the middlemen.
Recently, Shimelis Abdisa, President of Oromia region, told Capital that the region is also establishing four khat trading centers to modernize the stimulant leaf business.
He said that the region, which is the major source of khat export, is also working aggressively to change the market and productivity for the stimulant leaf, “We are giving the necessary attention to khat as like the coffee sector,” opined Shimelis.
“We are working to improve the khat market, which has been taken hold by the middlemen, rendering them to profit as opposed to the actual producers of the leaf,” he explains, adding, “we are strongly working to pushing out the illegal actors for the benefit of farmers.”
To improve the khat market; trading centers are developing at Awoday, which is the only and long established trading center for export khat. Likewise, Bedessa, Addis Ababa and Dire Dawa are similar trading centers.
The trading facilities will have standard storage area, packaging centre and other facilities on the aim to keep the export quality.
The productivity is also the focus area to expand the production and export.
According to Shimelis, the country is generating huge amounts of hard currency from khat.
The earnings from the stimulant that is mainly exported to neighboring countries takes almost a quarter from the total agricultural commodities export earnings within the first eight months of the budget year.
This makes the commodity the second largest exporting agricultural product after coffee and it stood at third position from the total export earning items in terms of earnings. From the total export earnings coffee and mineral exports stand a top respectively.
In the first eight months of the budget year that closed in early March, the country secured USD 280 million from khat export, which is a full accomplishment of the projection, while the volume has reduced by 10 percent when compared with the target.
In the stated period the country has exported over 44,400 tons of khat. Mostly the eastern Ethiopia, which is pioneer for the stimulant cultivation, khat product is highly promoted for export rather than other areas. However the production and local consumption has swiftly expanded in other parts of the country for the past few decades.
Most of the other areas of khat production are supplied to local consumers well known as khat chewers.