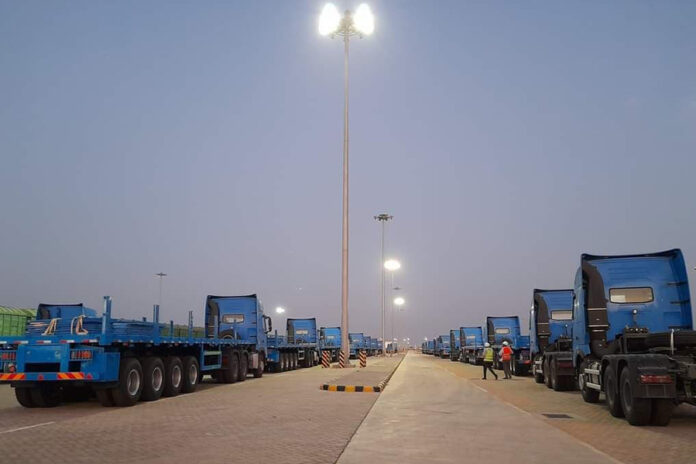 Ethiopian Shipping and Logistics Services Enterprises (ESLSE) floatation of an additional supply of150 heavy trucks catches the eye of six international companies.
It is to be recalled that the state logistics giant issued an international tender for the procurement of the stated number of trucks for its operation from seaports to the center.
At the initial attempt, the number of interested bidders reduced than the expectation which then pushed the enterprise to refloat the bid that opened on Friday, April 15.
According to Wondimu Denbu, Deputy CEO for Corporate Service at ESLSE, this time around six bidders have shown their interest to supply trucks.
He said that a preliminary evaluation of bidders has been conducted which will then be followed by a technical team evaluation before the opening of financial documents of the companies that pass the technical process.
“The technical evaluation may take more than a week, and primarily depends on the volume of the documents,” Wondimu told Capital.
Initially, the logistics giant invited companies to supply trucks on deferredletters of credit (LC), however, only one company showed its interest to engage in this scheme.
A few weeks ago, the Deputy CEO told Capital that the second-round bidding will take place with some revisions from the former bid document.
“On the second round of bid floating we have reviewed the scheme and invited interested bidders to submit their offer on both; normal procurement procedure and deferred LC,” the Corporate Service head at ESLSE explained mid this week.
Months ago, the government through the Ministry of Transport and Logistics approved a scheme for logistics companies to get a guarantee to import trucks with a 30 percent initial installment that shall be stated as buying trucks on differed LC. As per the initiative truck operators may open LC by 30 percent of the procurement value and the balance will be settled within two years.
The government has given the guarantee for the payment that will be settled in the timeframe given by the scheme.
As a logistics operator, ESLSE has also been included in the initiative and was given the go-ahead to import up to 150 heavy trucks, even though its demand was double the approved amount.
A year ago the logistics monopoly had bought 150 Sinotruk trucks from the Chinese Jinan Sinotruk Co at the cost of 11 USD million. This company was the only interested company to participate in the early deferred LC bid that was opened a few weeks ago. However, because of low interest in the first opening ESLSE issued the second round which opened on April 8 attracting six potential competitors.
The initiative which was embarked by the Ministry of Transport and Logistics allowed 168 transport companies to import 3,200 general cargo trucks through a deferred LC.
Recently, 38 trucks that are directly bought from the Chinese manufacturer at the cost of the same winning price of last year’s bid have entered into ESLSE’s operation. According to the country procurement rule, the enterprise has a right to conduct up to 25 percent additional direct purchase from the bid winning supplier, “that is the advantage we capitalized onso as to procure additional 38 trucks, besides the 150 Sino trucks, which are already in the operation,” officials of ESLSE recently told Capital.
Currently, ESLSE has 450 operation heavy-duty trucks and the new coming 38 trucks will increase the number to 488.
Besides operating the leased trucks from private logistics companies, ESLSE is expanding the operation and number of owned trucks since the sector is more profitable and allows the public enterprise to play its part to accelerate the logistics activity that as a sector is often criticized as a challenge for doing business in Ethiopia.
Different studies indicated that Ethiopia’s logistics sector is one of the poorest compared with the peer countries. To tackle the problem the government has embarked on different policy directions and initiatives including opening the sector with at least 49 percent share for foreign operators.