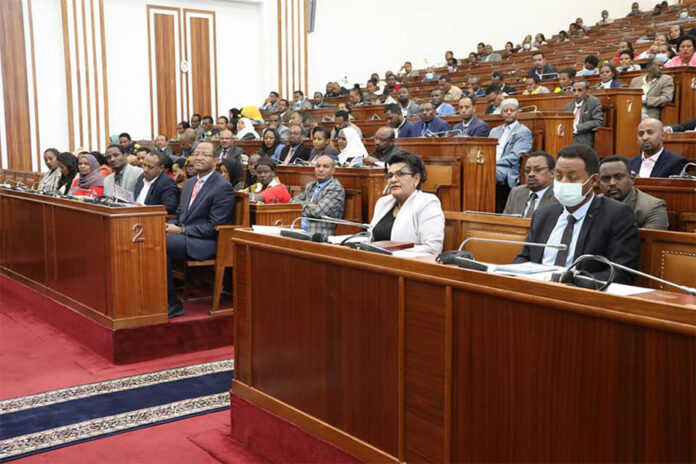 The Office of the Federal Auditor General’s (OFAG) performance report has stirred confusion between Ethiopian Roads Administration (ERA) and Ethiopian Construction Works Corporation (ECWC).
OFAG’s says that the corporation faces a penalty of almost seven folds of the Ethiopian GDP as per the contract failure.
During its appearance in parliament while presenting the 2020/21 budget year’s audit findings, OFAG said that ECWC had an agreement with ERA, former Authority, to rehabilitate and administer a 60 km asphalt road that is under Adama-Awash Arba line for ten years.
According to Meseret Damte, Auditor General of OFAG, the state owned construction firm has failed to run as per the contract agreement, “due to that only for two months (June and July 2021) the corporation has been faced to settle a penalty of 39.8 trillion birr, which is about USD 765 billion as per the current exchange.”
She added that the penalty that is demanded of ECWC is astronomically big when compared with the enterprise’s establishment capital.
“If the contract agreement is not swiftly revised or some sort of solution given to the construction firm, it may be dissolved,” Meseret told the parliament.
The claim that ECWC is expected to pay as per the calculation mentioned on the contract agreement is roughly 6.9 times higher of the country GDP.
The public enterprise was established late 2015 on the amalgamation of three enterprises; Ethiopian Road Construction Corporation, Ethiopian Water Works Construction Enterprise, and Ethiopian Prefabricated Building Parts Production Enterprise with an authorized capital of 20.3 billion birr.
Yonas Ayalew, CEO of ECWC, said that the contract agreement was an agreement that his corporation signed about six years ago, while it has put some forms of formula to calculate a compensation if his enterprise failed as per the deal with ERA.
He argued that the agreement is a type of deal that has never been seen before in the past, while ECWE was eager to engage on the project which later forced it to ink the agreements.
He said that ERA did not table a formal request for the compensation but the deal was supposed to be corrected, “Since it is a threat for ECWC’s existence.”
He expressed the compensation amount in retrospect as four decades-worth of Ethiopia’s budget.
Alemayehu Ayele, Deputy Director General of ERA, said that the contract is new for Ethiopia but usual in other countries. He reminded that similar agreements were signed with the Defense Construction Enterprise and Amhara Roads Works Enterprise for the rehabilitation and administration of Mekele-Adi Gudem, and Fitche-Goha Tsion respectively, which was signed by ECWC on June 1, 2016.
He said that the type of contract is a better operation run by similar organizations globally and “as a strategy we will definitely follow similar steps in the future since it has better alternatives to administration of road resources.”
“Since the contract was new, we provided an in depth training for contractors, to which two were administered by the central government and a region based enterprise so as to fully understand the details of the contract prior to engagement,” said the Deputy Director.
“The contract has given clear governing terms including conditions of penalties. We don’t consider that this contract has any gap and it does not include such kind of penalties,” Alemayehu explained.
“As per the rule there would not be such amounts of penalty, in fact as per the country contract administration penalty, it is applicable up to ten percent of the contract value, which is also mentioned on the contract agreement,” the Deputy Director General elaborated by reminding that ERA never asked for compensation.
“The contract is going as per the agreement and has a further period to be finalized,” he added.
The project that ECWC signed to rehabilitate and administer the 60 km road is worth 1.3 billion birr.
Alemayehu said that OFAG did not communicate with ERA. He expressed his views that the contract agreement was misinterpreted.
He responded that it is not necessary to revise the contract agreement since it does not have any confusion as mentioned by OFAG or ECWC.
The current head of ERA, Habtamu Tegegn, signed the contract on ECWC’s side as he was Deputy CEO of the corporation in 2016.