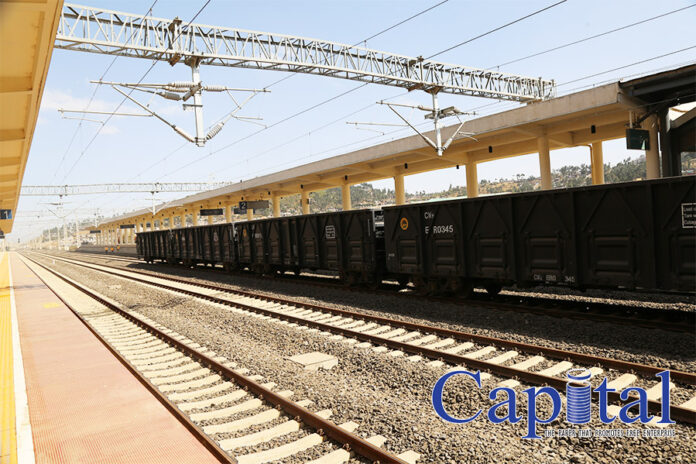 Ethio-Djibouti Railway (EDR) embarks on an eco friendly vehicle cargo transporting operation. In a single voyage the company which is jointly owned by Ethiopia and Djibouti has the capacity to move 240 vehicles to the centre.
In the past few months relevant offices and logistics companies of the two countries have been working to introduce vehicle freights through the cross country electrified railway system.
“The new initiative will save energy and cargos will be transported in bulk in less than 20 hours. This is great progress since vehicles transported via trucks take at least four days, in addition to the huge fuel consumption,” Abdi Zenebe, CEO of EDR said, adding, “Most importantly, the new service apart from saving time is environmentally friendly.”
EDR has 20 wagons that can transport about 240 vehicles in a single fleet. According to the CEO, a single wagon can carry up to 14 vehicles and the number depends on the size of the vehicles.
Although dependent on the size of the cargo cars, the vehicles shipment capacity of EDR on average is about 24 folds of car carrier trucks on its single fleet.
In the ended budget year, the joint company registered a marvelous achievement despite constrains on the logistics sector.
For instance, according to the CEO, from the total coffee consignment in the 2021/22 budget year, 98 percent have been stuffed and shipped through the EDR line.
“Containerizing the commodity locally has allowed the country to save USD 2.07 million in foreign currency besides job creation in the stuffing operation,” he explained.
If the commodities were to be stuffed outside the country, which is mostly done at the port area, it may cost USD 108 per container.
Compared with the preceding year in terms of incoming containers, export containers, and bulk cargo, the company handling capacity has increased by 42, 56 and 9 percent respectively.
The railway system that has a capacity to move massive cargos in a single fleet plays a crucial role to reduce freight expense. Regarding this, Abdi said that the company contributed to save up to 54 percent cost in the import export activity.
In the year, EDR has handled 14,570 TEU and 56,781 TEU export and import containers in addition to 1,465,900 quintal bulk cargo.
“The railway mass freight transportation has saved 939 million birr which could have been spent if cargos were transported through trucks,” the CEO explained.
Through centric focus on the containerization and stuffing, the EDR has expanded the export commodity local stuffing capacity to 62 percent from 48 percent of the preceding year.
“Through modernizing the logistics handling as a nation, the country has saved 2.4 billion birr and of that almost half of it is our contribution,” Abdi explained.
In the year, EDR has also supported the export sector by supplying empty containers for export commodities mainly for coffee consignment at half price.
The CEO told Capital that in the budget year, the company has transported 50 million liters of edible oil from Djibouti.
“We have been engaged with CCECC Djibouti to diversify the operation and through the bulk cargo containerization agreement, we have 500 containers that allow us to transport bulk cargos with containers besides box wagons,” the CEO concluded.