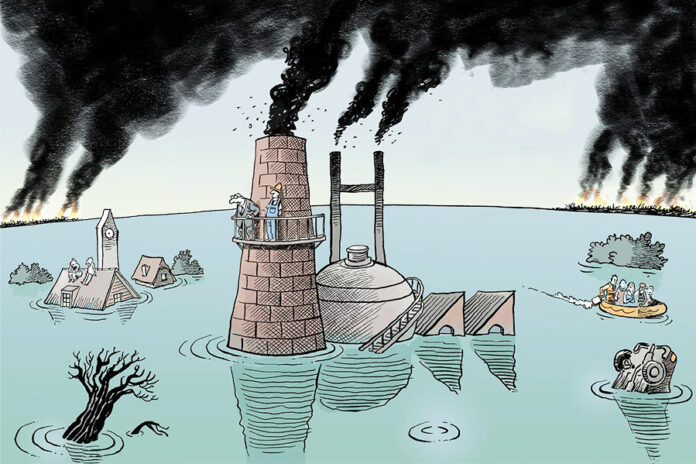 We the so-called modern humans are full of it, if you know what we mean. Just because we have managed to manipulate the non-reactive looking natural world to our imbecilic satisfaction, it doesn’t mean we are actually on top of things! Whether we like it or not, there will be severe environmental consequences on the account of our excessive abuse. The implied assumption; there would be no significant repercussion to our shortsighted nefarious actions is fatally wrong. The time of reckoning is upon us and from the look of things conditions are going to get worse by the day. Every year is the hottest year on record until the next year came along and shattered the short standing record. When will this end?
It is our considered opinion that environmental/climate change will keep on accelerating and humanity will soon enter the fast tract to perdition, without the possibility of even slowing the pace! The so-called research institutions, which are (by and large) under the jurisdiction of the state, itself run by notoriously incompetent politicos and clueless bureaucrats, are not independent enough to convey their findings directly to the sheeple in terms it can easily understand, lest revolutions erupt! For example the administration in the US has forbidden the EPA (Environment Protection Agency), the Department of Agriculture as well as Health, not to release certain scientific data/findings unless authorized by specially assigned minions of the politicos. In other words, if something is found to be dangerous to life in general and humans in particular, scientists are not duty bound to reveal results to the world at large. Here is a case in point; research in Russia revealed sustained consumption of GMO (Genetically Modified Organisms) food will cause sterility in subsequent generations! The research was conducted on mammals (mostly rats). In the West such researches are usually frowned upon, compliment of corporate research grants. Where such similar researches were conducted (in the West) results came out more or less the same. The main difference being the generational count at which full-fledged sterility kicks in! Russia has now banned GMO and soon will try to restrict imported food items from countries vigorously pursuing the GMO craze!
Data from climate change research are also not flowing freely to help enlighten the dormant sheeple. As a result, frustrated committed intellectuals are resorting to tactics that are akin to aspects of civil disobedience. The surprising thing about climate change deniers is; they purposely/selfishly want to remain selectively scientific. They believe in the science/technology of extractions/exploitation; (be it in areas of fossil fuel, nuclear technology, etc.), while unscientifically rejecting the resultant consequences! Incidentally, we have been shrieking about the stupid ways humans handle ‘God’s Fire’ = nuclear energy, since we started scribbling on this paper. Immediately after the Fukushima accident, we went full blast and emphatically asserted Fukushima, as a nuclear accident, is/was a class by itself dwarfing Chernobyl by a significant degree of magnitude. At the time, no competent expert came forth to admit what was happening on the ground. Obviously their incomes depended on them not revealing scientific facts! Subsequently the Japanese government also passed a ‘gag order’ to silence concerned citizens and informed critics.
Factually commenting on the Fukushima nuclear power plant accident has become a crime, a case of blaming the messenger, pathetic! Instead of educating the sheeple about the severity of the accident, the politicos, as usual, decided to keep on sugarcoating the whole saddening reality. It is such chronic shortsightedness that is at the root of almost all major problems currently encountered! This is why we insist; politicos must never be allowed to decide on critical issues on their own, since they are neither competent nor trustworthy. The sheeple must always be involved in the decision-making processes of such important life and death matters, per force! At the end of the day, what good is economic growth if humans cannot be around to either benefit or even suffer the supposed outcomes of growth! Life should not be forfeited on the account of some stupid superficial social constructs, mostly steered by psychopaths. Obsessing with money or power (trying to dominate/conquer this or that nation/people) etc. are all sure signs of disturbed minds!
Human beings must face the monster they have created, namely, the techno-sphere. The techno-sphere is aggressively threatening to wipe out, not only humanity, but also all higher forms of life. Humans should not trade natural life for gadgets/trinkets as these man-made junks/stuff are mere byproducts of our unhealthy hyper activity.