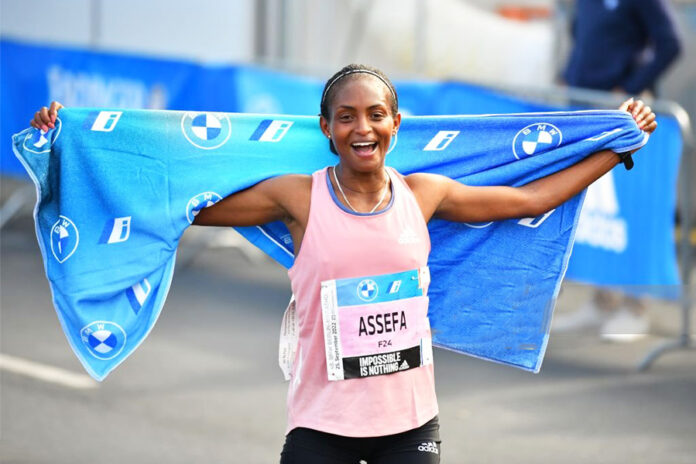 On a day when Kenyan legend Eliud Kipchoge set a new men’s world record of 2:01:09, the women’s race started off at a blazing fast pace, too. D’Amato, a 37-year-old mother of two from Virginia, gave it a valiant effort, but she ultimately had to settle for a sixth-place, 2:21:48 showing in the wake of Ethiopia’s Tigist Assefa’s surprise victory in 2:15:37.
Tigist Assefa was bolstered by a strong pack of her Ethiopian countrywomen and Kenya’s Rosemary Wanjiru maintaining the hot pace up front. After coming through the halfway mark in 1:08:13, Assefa ran an almost unfathomably fast second half of the race and finished in a 1:07:25 negative split after surging away from Wanjiru to seal the win.
Assefa, a 28-year-old Olympic 800-meter semifinalist on the track in 2016, shocked the running world by running a 19-minute personal best and finishing with the third-fastest women’s marathon time in history. Only Brigid Kosgei’s 2019 world record of 2:14:04 and Paula Radcliffe’s 2003 record of 2:15:25 are ahead of Assefa on the all-time list. Assefa also broke the women’s course record in Berlin by outrunning the 2:18:11 mark set by Kenya’s Gladys Cherono in 2018.
Wanjiru wound up a distant second in 2:18:00 after running 1:09:43 over the back half of the race. Then it was a trio of Ethiopians Tigist Abayechew (2:18:03), Workenesh Edesa (2:18:51) and Sisay Meseret Gola (2:20:58) in third, fourth and fifth, respectively.