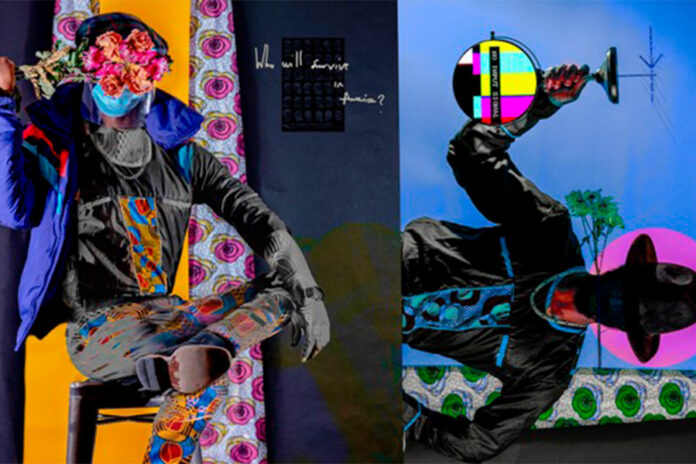 The Africa Center announces States of Becoming, an exhibition curated by Fitsum Shebeshe and produced by Independent Curators International (ICI) on view at The Africa Center at Aliko Dangote Hall from October 14, 2022 through February 26, 2023. States of Becoming examines the dynamic forces of relocation, resettling, and assimilation that shape the artistic practices of a group of 17 contemporary African artists who have lived and worked in the United States within the last three decades, and informs the discourse on identity construction within the African Diaspora. States of Becoming will be the first major contemporary art exhibition at The Africa Center since its transition from the Museum for African Art in 2013, and will be the first presentation of the touring exhibition produced by ICI. Tickets to the exhibition will be available at theafricacenter.org in early-October 2022.
“States of Becoming was born out of my own process of relocating to the United States in 2016,” Shebeshe said. “This exhibition allows for further understanding of not only my own experiences, but also those of the artists. By analyzing both the unique aspects and commonalities together with The Africa Center’s global and local communities, we can reimagine together how we think about how identity is continually shaped and reshaped.”
“There has been a significant and accelerated shift in the ways African and Afro-descended people are now connecting with each other and with the African continent no matter where we are in the world. Culturally, we’re experiencing a renaissance with both our African and African diasporic experiences at the center, rather than having to choose to focus on one or the other, and born from our many histories of movement, relocation, and rebuilding of our lives and communities,” said Dr. Uzodinma Iweala, CEO of The Africa Center. “Through the cultural markers and forms of creative expression that are the most unique to African and African Diasporic communities, States of Becoming explores the ways in which both African and Afro-Diasporic identities co-exist and shape each other, offering us an opportunity to imagine what the contemporary and future Pan-African identity – or identities – might become.”
“In States of Becoming, curator Fitsum Shebeshe contributes a significant and personal view of contemporary art of the African Diaspora, and reasserts the importance of a curator’s lived experience in exhibition-making,” said Renaud Proch, ICI’s Executive & Artistic Director. “All of us at ICI are proud to see the exhibition debut at The Africa Center, an African-centered home for Shebeshe’s vision and the multidisciplinary perspectives of the artists, making this an ideal start to the exhibition’s five-year tour.”
The concept for States of Becoming evolved from curator Fitsum Shebeshe’s lived experience following his 2016 move from Addis Ababa, Ethiopia to Baltimore, Maryland and his subsequent firsthand knowledge of the weight of cultural assimilation. Confronted with a different society, Shebeshe encountered a wide range of existential questions that shaped his relationship to institutions and culture. Shebeshe also had the realization for the first time that he was viewed as belonging to a minority because of the color of his skin, and a newfound awareness of the profound impact Ethiopia’s traditional and conservative culture had on his personal sense of individuality.
Having found kinship among cultural practitioners from the African Diaspora who shared his experience, Shebeshe has united 17 artists with States of Becoming who either came to the United States over the past thirty years or who are first-generation born. The artists represented in States of Becoming relocated from twelve countries in Africa and one in the Caribbean–Ethiopia, Ghana, Ivory Coast, Kenya, Liberia, Mauritania, Nigeria, Senegal, Sierra Leone, Sudan, Trinidad and Tobago, Tunisia, and Zimbabwe–with roots in cities across the U.S., including New York, Washington, D.C., New Haven, Detroit, and Los Angeles.
Like Shebeshe, each artist in the exhibition has had a unique relationship to the U.S. context, which is reflected in their work. States of Becoming explores these artists’ perpetual process of identifying, redefining, and becoming themselves in both local and global contexts, opening up perspectives into multiple states both geographic and emotional in a constant flux of social and cultural adaptations. The exhibition presents work across mediums including painting, photography, sculpture, installation, and video, that express the many different ways in which identity is remade and reimagined. For instance, Nontsikelelo Mutiti looks to hair braiding salons of the African Diaspora, and Amare Selfu moves from figuration to abstraction to express transformation as a result of relocation. These distinct experiences produce a sense of hybrid culture emerging out of real and imagined genealogies of cultural, racial, national, and geographic belonging.
Although the individual artistic methodologies and experiences of the artists featured in States of Becoming vary, each seeks to reconceptualize a hybrid culture formed from real and imagined genealogies: cultural, racial, national, and geographical belonging. The exhibition is loosely arranged with three main categories: those whose aesthetic forms have undergone drastic transformations since migrating; those who desire to share the experiences and culture of their country of origin within the communities in which they now reside; and those who build bridges between the African diaspora and African American artists of their host country. By contextualizing these practices today, the exhibition provides a space to consider the intersections and contribute to the evolving discourse on relocation, resettling, assimilation, and identity construction.
(Africa.com)