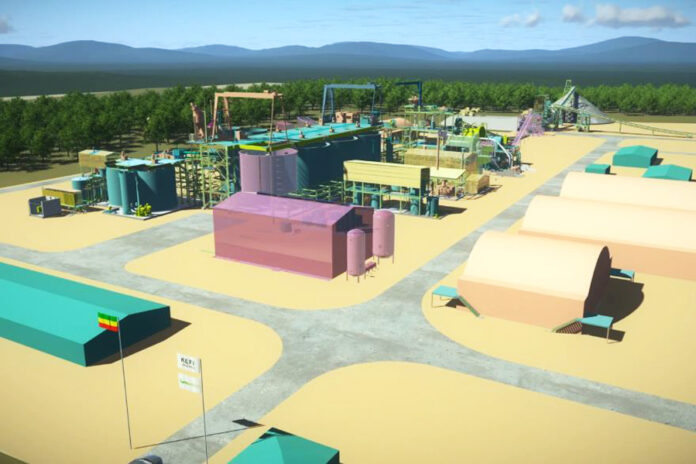 KEFI Minerals (Ethiopia) Ltd which is expected to launch the Tulu Kapi Gold Project of the Tulu Kapi Gold Mines SC (TKGM) in the coming few weeks, discloses that the formation of endowment will allow the investor to undertake regular and formal corporate social responsibility (CSR) in the investment area and Ethiopia.
The company that was awarded a mining license in 2015, which is to span two decades from the commencement of the production, will be the first industrial scale mine development in the country in over 30 years.
So far the information that Capital obtained from senior leadership of the mining firm indicated that the well designed rehabilitation and resettlement of the community that will leave the mining investment area has been finalized for implementation.
According to Abera Mamo, Country Manager of TKGM, the company has formed an endowment called ‘Tulu Kapi Charitable Endowment’ that will be involved in socio economic development in the area.
The endowment will use the fund secured from TKGM and other global partners and companies.
“On its full support program, the endowment will develop schools, health facilities, roads and other huge sustainable development projects that we will be disclosed in the future,” the Country Manager said.
“Currently, the leadership and relevant staffs have already been hired for the endowment, which we consider will provide huge benefits for the community in the area,” he added.
According to the leadership of the mining company, the compensation fund has already been allocated, while the company is working with the relevant public bodies and others to provide capacity building for the community members to utilize their compensation properly.
“A single house hold will get a huge sum of compensation but he or she should have a clue regarding how to use it. For that, training will be provided by experts and the cost for that will be covered by the company,” Abera said.
With regards to commencing the project like erecting a processing plant, the company disclosed that it has already assigned Lycopodium Limited, who are specialists on similar projects having built 57 gold plants and working in over 20 African countries in the past over 20 years. The project that will consume up to USD 300 million is expected to commence by the coming weeks and the production will start by the end of 2024.
The Exploration Licences held by KEFI Minerals cover an area of approximately 200 square kilometers over and near the Tulu Kapi deposit.
When the production commence there will be a yield of 140,000 ounces per annum of gold worth USD 180 million at USD 1,300 per ounce.
Tulu Kapi Gold Project is located in the West Wolega zone, Oromia region 360km west of Addis Ababa.
Recently, TKGM concluded a three-day workshop with representatives of various Ethiopian government agencies and other local representatives to agree on the immediate actions required for the launch of the company’s Tulu Kapi Gold Project.