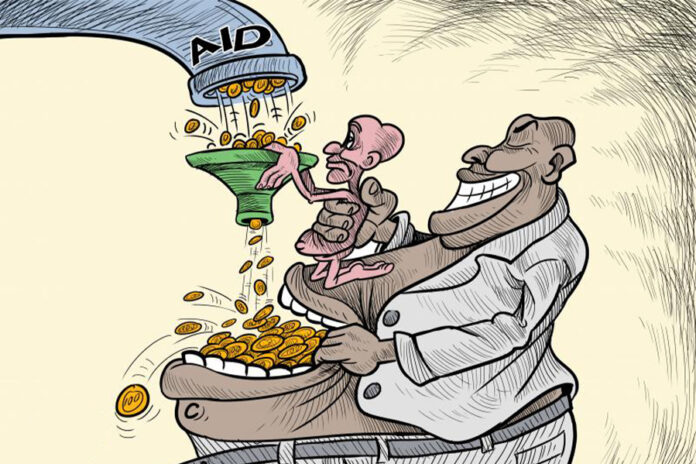 As expected, the ‘Africa Rising’ meme didn’t last long. It fizzled out like the morning dew. The flimsy euphoria fanned by the gullible natives and their foreign instructors lasted only a decade and half! Even though its unsustainability was predictable from the outset, our elites under the influence (of neoliberalism, developmentalism, etc.) were not willing to face the bitter truth about the complexity of development. Unfortunately and for the most part, the aim of politicos is temporary appeasement, to secure a few rounds of elections. A splurge of mostly useless/wasteful investment (plenty of white elephants) propelled by massive debt and cyclical commodity boom is not a sign of vigorously developing economies!
Indebtedness is/was bound to impose on the debtor all kinds of demands. Privatization, deregulation, liberalization and austerity remain the main impositions of creditors, mostly of the core countries. The overall effect of these programs is to undermine effective sovereignty. Our half-baked intellectuals are/were not capable of deciphering the intentions behind the ‘Africa Rising’ clamoring! After being liberated from the substantive elements of critical thoughts, our postcolonial elites succumbed to the systemic humdrum analysis unleashed by the well versed (upon us). Always praising the superficial reality of Africa’s phony progress, entrenched interests managed to derail non-conventional approaches to genuine and sustainable development. Making money from nothing, like the speculative appreciation of stock prices, (without adding value) is how the globally connected are making a killing in our financialized world. Ultimately, it is the likes of us who end up being victims of such financial manipulation, directly through elite promoted FIRE or indirectly through the various unequal exchanges of lopsided globalization.
In fact, many of our elites became the quintessential rent seekers, trailblazing FIRE (Finance, Insurance, Real Estate), as if there is no tomorrow. To help the whole scheme, credential-ism was made king. The difficult vocation of criticality was systemically neglected to make room for the prevalent dominant mediocrity. Meritocracy is/was detested by all and sundry and had to exit from the scene. The vacuous opportunists, including the politicos of limited vision and temporal objective have taken charge! The rent seeking elites still want to pursue comprehensive dependence, though it is preached as ‘arrival’, to the world of globalization. Neoliberalism’s financialization, which is facing serious challenges within the core countries, is still a sought after objective of our parasitic elites, who are comfortably settling in their domicile of FIRE! It seems Africa’s situation is akin to that of Yeltsin’s Russia, when there were no committed activists to challenge the daylight robbery of the Russian Motherland and its state.
The powerful global institutions of neoliberalism encouraged Africa’s latest immersion in massive debts with gusto! After all, in this highly financialized world of late modernity, the so-called development, geared by the logic of neoliberalism, can only lead to debt enslavement. Given this complex reality, wise leadership, not given to the usual establishment trappings, (like ‘Africa Rising’ bullock) is urgently needed. Committed and capable leadership festooned with scholarship and deep/diverse experience is a sine qua non to extricating African countries from their dead-end trajectories. Admittedly, such a high caliber leadership, somewhat similar to those leaders of liberation, is a very rare commodity, despite the proliferation of institutions of higher learning! In Africa, learned elites are a dime a dozen, but they can hardly articulate original policies on diverse issues concerning the continent. It is a clear and demonstrated absence of critical thinking that earns them their credentials and their salaries! One thing is for sure; our learned idiots are good at mimicking frivolous stuff. Unfortunately they import these junks, material or otherwise, to our relatively virgin continent. There will be a price to pay. Hyper inflationary consequences are surfacing all over the continent, without the leadership capacity to manage it (Zimbabwe, etc.)!
By undermining committed souls and their semi-organized activities, the compromised elites at the service of globally entrenched interests have fostered a robustly wholesome extremist tendency across the continent. Such unhealthy socio-economic reality is bound to be destabilizing and chaotic. Because of these and other aproblems, many countries in Africa have become increasingly fragile. The regions of the ‘Sahel’ and the ‘Horn’, countries like Nigeria, Congo, Zimbabwe or even South Africa, are encountering determined extremists with hardly much room for compromise. Continuous criminal accumulation of the elite, at the expense of the working stiff, is the root cause of the grievances fuelling unrest in places like Nigeria, Congo, Sudan and South Africa. Here is a lesson we can draw from the above experiences. Inequitable development, however glamorized by those who do not wish us well, is a short term parochial strategy bound to explode in insurgency, insurrection, disintegration, etc.!
This editorial was first published in 2019