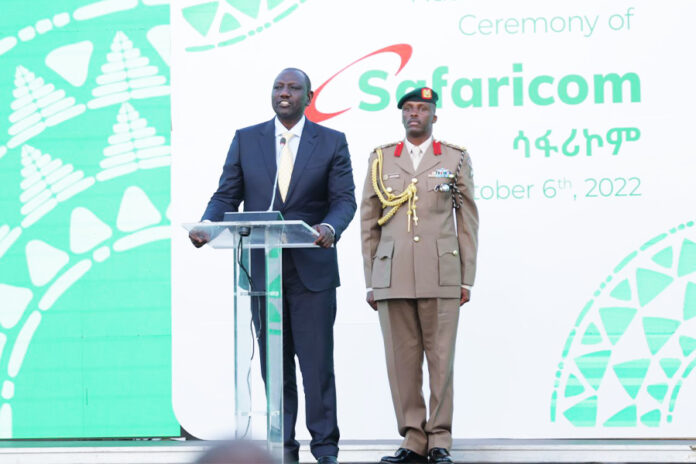 Government announces that it has granted Safaricom Ethiopia a license to operate its mobile money platform M-Pesa in Ethiopia after reaching agreements with the government of Kenya.
As sources disclosed, the two governments (Ethiopia and Kenya) were in discussions to grant the telecom company access to the mobile money market in the country. As indicated, the preconditions set by the two countries have been finalized on Thursday, October 6, 2022.
Likewise, Kenya’s newly elected President William Ruto paid a one day visit to Ethiopia and was in attendance at the Safaricom national launch.
Sources close to the issue indicated that up until the announcement of the go ahead by the Finance Minister, Ahmed Shide, the National Bank of Ethiopia was unaware of the decision.
Sources have declined to give details on the set of conditions and likewise the Finance Minister did not disclose them either.
“When I left Kenya for Ethiopia, I carried with me the assignment from my people, to come back with a Safaricom license. Thank you, PM Abiy for making this possible since I will now go back home having accomplished the assignment sent forth by the people of Kenya,” remarked President Ruto.
“A deal has been reached between the governments of Ethiopia and Kenya with regards to Safaricom being granted a license for mobile money services in the country,” said Ahmed Shide, whilst speaking at the national launching ceremony of Safaricom Ethiopia with the attendance of PM Abiy Ahmed, president William Ruto and higher officials from the two countries.
“You are now open to deploy your capacities on this very important service,” the finance minister stated.
Earlier this week, Anwar Soussa CEO of Safaricom Ethiopia, told capital that the shareholders are in discussion with the government.
“We are now working together with the central bank and the shareholders are negotiating with government on common grounds of understanding. We feel that we are edging close to finalizing the regulation,” said Anwar prior to the M-Pesa go ahead announcement.
Safaricom Ethiopia had earlier stated that it was participating in the consultation process with the national bank in amending the financial proclamation.
A few months back, the new telecommunications entrant announced that it has started to purchase equipment to operate M-pesa in Ethiopia, and owing to the fact of the country’s financial law not allowing foreign companies to participate in the financial sector, the company was awaiting for the national bank to amend the existing law.
The amendment of the proclamation was under pipeline and was expected to be ratified by the parliament soon since current working law doesn’t warrant foreigners to be involved in the financial sector.
Safaricom Ethiopia has now switched on its network and services in Addis Ababa and has rolled out a national launch ceremony following its network pilot success in 10 cities across Ethiopia.
Safaricom is the largest telecommunications service provider in Kenya with a market share of 64.6% and shareholders comprise the government of Kenya (35%), Vodacom (35%), Vodafone (5%) and free float (25%).
Currently, Safaricom- Ethiopia has registered 200k customers but the number will soon rise astronomically as it gears for a national customer base.