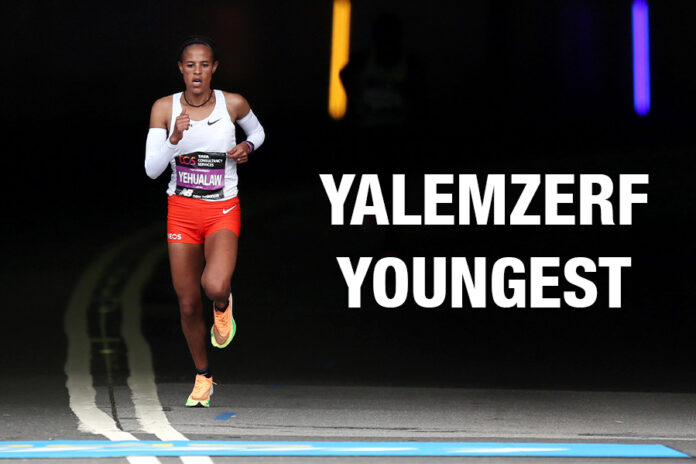 At the third and final October edition of the TCS London Marathon, Ethiopia’s Yalemzerf Yehualaw used powerful late-race surges to win Europe’s largest marathon in 2:17:26. Yehualaw, 23, became the race’s youngest-ever winner, and got her first-ever Abbott World Marathon Majors victory along with USD 55,000 in prize money plus time bonuses.
Yalemzerf was joined at that point by compatriots Sutume Asefa Kebede, Ashete Bekere, Alemu Megertu and Hiwot Gebrekidan, while Kenyans Judith Jeptum Korir and Joyciline Jepkosgei were also there. Joan Melly Chelimo, who formerly represented Kenya but now runs for Romania, filled out the leading group.
In the 33rd kilometer Yehualaw was running at the back of the pack, and as she went through a crosswalk she suddenly fell (it wasn’t clear why). She quickly got to her feet and in less than a minute rejoined the lead pack. She didn’t appear to be injured; her running form looked normal and there were no visible scrapes or cuts.
Without question, Yehualaw was still trying for Keitany’s record in the final two kilometers, but she just ran out of time. Her winning mark of 2:17:26 was the third-fastest ever at London behind only Paula Radcliffe’s 2:15:25 from 2003 and Keitany’s 2:17:01 from 2017.
Jepkosgei got second in 2:18:07 and Megertu third in 2:18:32. Korir –who won the silver medal at the marathon at the World Athletics Championships in Eugene last July, and originally planned to be a pacemaker here– was fourth in 2:18:43. Melly got fifth in 2:19:57.
Although she didn’t win the USD $355,000, her total payday (not including her appearance fee or any private bonuses her management negotiated with the race) was a solid USD $205,000 ($55,000 for the win plus $150,000 for breaking 2:17:30).
It’s remarkable that Yehualaw has only run two marathons. She made her debut in Hamburg last April, and her mark of 2:17:23 was the fastest-ever by a debutante.