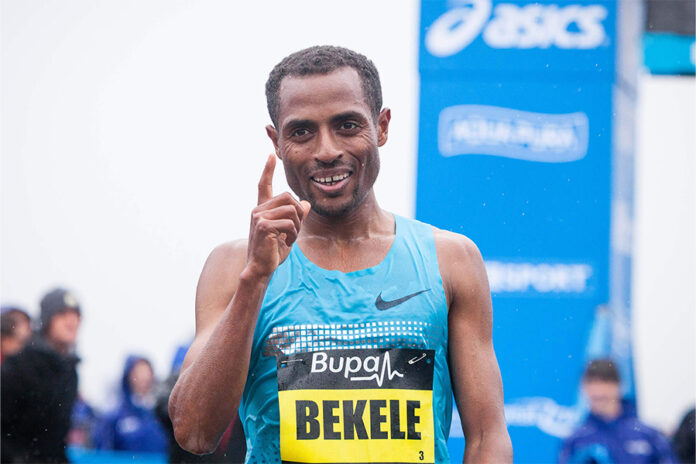 Kenenisa Bekele made headlines last week by declaring “of course I am the best” long distance runner ever. But the Ethiopian was fifth-best at London Marathon, finishing 74 seconds behind Kenya’s Amos Kipruto.
Kenenisa, 40, clocked 2:05:53, the fastest-ever marathon by a runner 40 years or older. He was with the lead pack until being dropped in the 21st mile. But Kenenisa estimated he could have run 90 to 120 seconds faster had he not missed parts of six weeks of training with hip and joint injuries.
“I expect better even if the preparation is short,” he said. “I know my talent and I know my capacity, but really I couldn’t achieve what I expect.”
Bekele is the second-fastest marathoner in history behind Kenya’s Eluid Kipchoge, who his own world record. by clocking 2:01:09 at the Berlin Marathon last week.
“I am happy when I see Eliud Kipchoge run that time,” Kenenisa said. “It motivates all athletes who really expect to do the same thing.”
Kenenisa’s best time was within two seconds of Kipchoge’s previous world record (2:01:39). He described breaking Kipchoge’s new mark as the “main goal” for the rest of his career.
“Yes, I hope, one day it will happen, of course,” Kenenisa said. “With good preparation, I don’t know when, but we will see one more time.”
Nobody has won more London Marathons than Kipchoge, a four-time champion who set the course record (2:02:37) in 2019. But the two-time Olympic marathon champion did not run this year in London, as elite marathoners typically choose to enter one race each spring and fall.
Kenenisa does not know which race he will enter in the spring. But it will not be against Kipchoge. “I need to show something first,” Kenenisa said. “I need to run a fast time. I have to check myself. This is not enough.”
Kipchoge will try to become the first runner to win three Olympic marathon titles at the Paris Games. Bekele, who will be 42 in 2024, has not committed to trying to qualify for the Ethiopian team.
“There’s a long time to go before Paris,” Bekele said. “At this moment I am not decided. I have to show something.” So who is the greatest long distance runner ever?
Kenenisa can make a strong case on the track:
Kenenisa
Four Olympic medals (three gold)
Six World Championship medals (five gold)
Former 5000m and 10,000m world-record holder
Kipchoge
Two Olympic medals
Two World Championship medals (one gold)
But Kipchoge can make a strong case on the pavement:
Kenenisa
Second-fastest marathoner in history
Two World Marathon Major victories
Kipchoge
Four of the five best marathon times in history
Two-time Olympic marathon champion
12 World Marathon Major victories