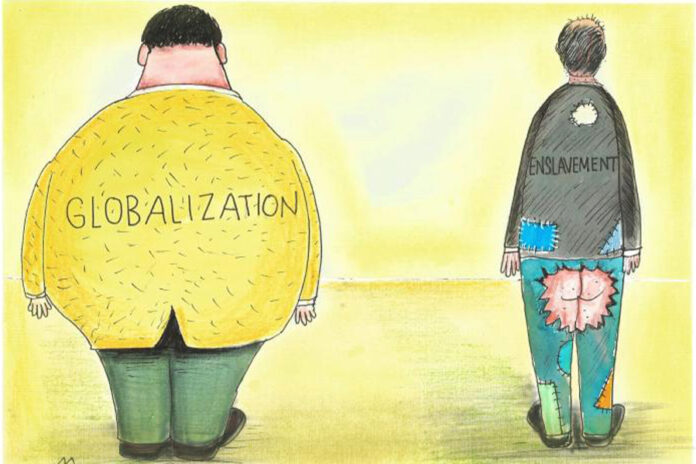 The ruling ideology of the world order is anchored on the powerful human vice of unadulterated greed. Almost everything we do in our world system, collectively or otherwise, is based on this principle, even though it is not explicitly stated as such by the global status quo. The economic aspect of the system upholds exploitation and competition as the alpha and omega of collective existence. Its political governance, which espouses certain aspect of democracy, mostly representative/electoral democracy, is dictated by the ‘rule of money’, to a very large extent. Such a regime of plutocracy is pronounced in the core countries of the west, particularly in the United States of America. After WWII, the US became the reigning hegemon and managed to dictate global policies, economic and more, without effective impediments, despite the socialisms of the day. The globalization thus promoted, willy-nilly, ruled the planet, up until now!
As always, we are quick to qualify the existing globalization as a polarizing one. If it weren’t so polarizing, there wouldn’t be myriad challenges against it, given its very short existence (post WWII). One of the hallmarks of the current polarizing globalization is its violent expropriation, both from nature as well as from the weak peripheral societies. This has been done, to a large extent, by a cleverness of stealth dimension! By leveraging the on-going destructive ideology of commodification, which has given rise to excessive monetization, the system managed to hoodwink all and sundry, including its latest victim-Maoism! The current globalization utilizes various tools to promote its objectives. To this end, its core ideology of greed has been elevated to a sacrosanct religion of global prominence, with money as its supreme deity! Such a totalitarian doctrine stifled inquiries all over the modern world, even in those countries that were once regarded as relatively liberated/enlightened (Nordic, etc.). Generally speaking, the system as a whole has lost its propensity to engage in critical reflections. This attitude is no more confined in the realm of social thoughts, but has also encroached into the world of natural philosophy or what is now called the hard sciences!
The institutions that actively promote the polarizing globalization of our times are quite numerous. Suffice is to mention only the significantly influential ones. From the indoctrination mills of the global universities to institutions of global economic governance, (IMF, WB, WTO, etc.) from the machineries of global political governance/dominance, (UN, NATO, etc.) to the integrated media, consisting of the entertainment industries, including spectator sports, (which must fall under the category of entertainment, per force, rather than a vocation promoting healthy living) are the main tools of the prevailing unsustainable globalization. The ever-canny global status quo has thoroughly mobilized, almost all of the world’s sheeple, (human mass) into worshipping its religion. Anything that is construed as lying outside the kingdom of greed is shot down viciously. However, there have now emerged issues that are not lending themselves for the usual facile narrations. What is proving difficult to hide for the ever-manipulative status quo is the natural phenomenon that resulted from man’s obsessive interference in the workings of nature. Climate change, species destruction, acidification of the oceans, diminishing of resources, inadequate sink for all our pollution, etc., are gradually entering the consciousness of the sheeple, wherein hope resides!
Despite the overwhelming power (military, finance, media, etc.) of the establishment, there are still brave souls across the planet willing to expose the system’s comprehensive objective. Chelsea Manning, Julian Assange, Edward Snowden are amongst the vanguards. Unfortunately, the wretched in Africa still lack determined souls willing to ‘rock the boat’, so to speak. After half a century of flag independence, we Africans are still wallowing in the sickening world of ‘black skin white masks’, as if we are still in those days of colonial affliction (psychopathology of colonization), as thoroughly explained by the Martinique psychiatrist Frantz Fanon! Luckily and at the global, an increasing number of people along with activist-intellectuals are moving towards liberation of thoughts and sustainable of deeds. At the same time, the establishment continues to become visibly moronic!