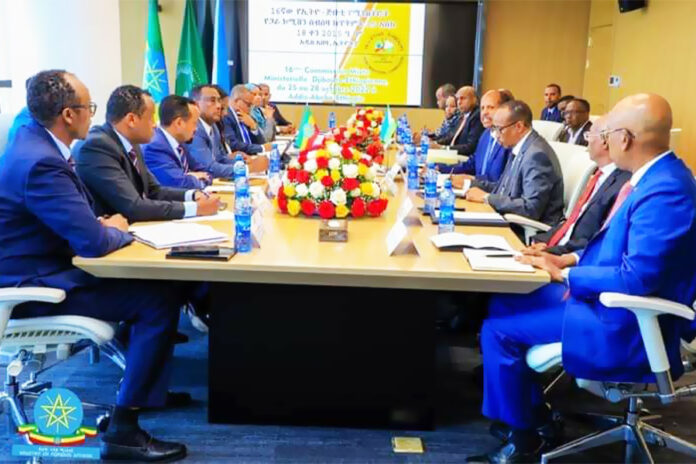 Djibouti’s port authorities underscore that harsh weather conditions catalyzed by heavy rains was the main reason for the disruption of road network access within its borders. The Djiboutian delegation who were in attendance for the 16th Ethio-Djibouti Joint Ministerial Commission meeting also made it clear that marine charge adjustments were not applicable to Ethiopia’s vessels.
The high profile joint Ministerial meeting which resumed after a three year pause following the global pandemic was held at the Inter Luxury Hotel, Addis Ababa from 24 to 28 October.
According to the information Capital obtained from the delegation led by Demeke Mekonnen, Deputy Prime Minister and Minister for Foreign Affairs of Ethiopia, and Mahmoud Ali Youssouf, Minister for Foreign Affairs and International Cooperation of Djibouti; both countries have reaffirmed the enhancement of an inclusive cooperation.
Members of the delegation from Djibouti’s side have likewise told Capital that the latest meeting is a sign of strong relations between the two bordering countries. At the meeting, cooperation on regional, multilateral and economic integration between the two countries was discussed. Subsequently, during the other three days, major joint ministerial meetings on political matters, transport, logistics, trade and commerce, port related issues, agriculture, border security, and infrastructure matters were looked into.
During the meeting, one of the issues raised was hurdles faced in road disruption on the Djibouti side which posed a challenge to Ethiopian truck drivers, who use one of the three border links, the Djibouti-Galafi route.
The Djiboutian delegation cleared up the issue citing that relevant bodies in Djibouti had made frequent maintenance on the Galafi route; however natural harsh rainy conditions at the time made it a challenge.
“We frequently conducted maintenance activities on the road but the heavy Djibouti rains were washing away the infrastructure which made the revamping process hard,” elaborates Aboubaker Omar Hadi, chairman of Djibouti Ports and Free Zones Authority to Capital whilst highlighting the major challenge for the road damage. With regards to the twenty percent price adjustments made a few months back on the Djibouti ports marine service charge, the Djiboutian delegation confirmed that it was not applicable to Ethiopia’s vessels. “We reaffirm that such increments do not apply to Ethiopian vessels,” one of the delegates explained.
The marine industry in recent years has faced unprecedented price hikes in connection to the global COVID pandemic and the Russia-Ukraine war. Recently the global sea transport fee has seen a rise of almost three folds in pricing.