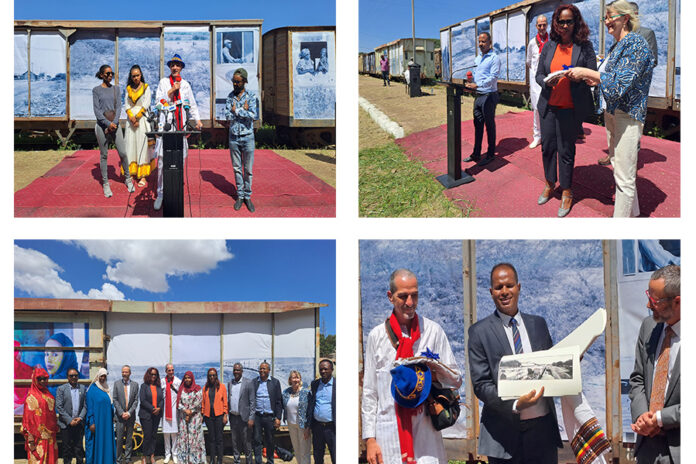 As part of the celebrations of 125 years of cooperation between France and Ethiopia, the French Embassy and the City of Dire Dawa, under the patronage of the Ethiopian Minister of Tourism, inaugurated today at the Dire Dawa train station the “Urban Revival” exhibition realized by the association “Ecole d’Art au Village”, and dedicated to a monument of Ethiopian culture, trade and tourism: the Ethio-French Train.
The “Urban Revival” exhibition is a documentary and educational project, conceived as a testimony of the contribution of France to the development of key technological infrastructures which have allowed to enhance Ethiopia’s connectivity in many aspects. His Excellency Rémi Maréchaux, Ambassador of France, stated that the Ethio-French train is an essential element of Dire-Dawa’s identity, underlying that the exhibition deserves being shared with the youngest ones, as a living intergenerational link, and a key asset to promote Dire-Dawa as one of Ethiopia’s exemplary touristic destinations.
Another exhibition, entitled “Children of Dire Dawa : the future of Urban Revival”, held at the Ethio-French Alliance, was inaugurated in the aftermath by the Minister of Tourism of Ethiopie, the French ambassador and the representatives of Dire Dawa administration, in presence of the children of Misrak Jenoch School and children of railway workers’ families who participated in the creation of the graphics and art pieces.
The exhibitions are based on a documentary work including photography, texts and captions on the train and its users by the French photographer Sébastien Cailleux; and drawings by the artists Wendimagegn Gashaw, Selome Muleta and Leikun Nahusenay. They also present pedagogical contents, elaborated by children of Dire Dawa city during cultural and artistic education workshops.
The French Ambassador Rémi Maréchaux expressed France commitments to continue being supportive of Ethiopian local development strategies, including enhancing human capacities with its institutional and educational partners, in a long- standing relationship of confidence. He also gave a warm tribute to the City of Dire Dawa administration and to the Minister of Tourism Ambassador Nessise Challi for their enthusiastic involvement on such a special anniversary.