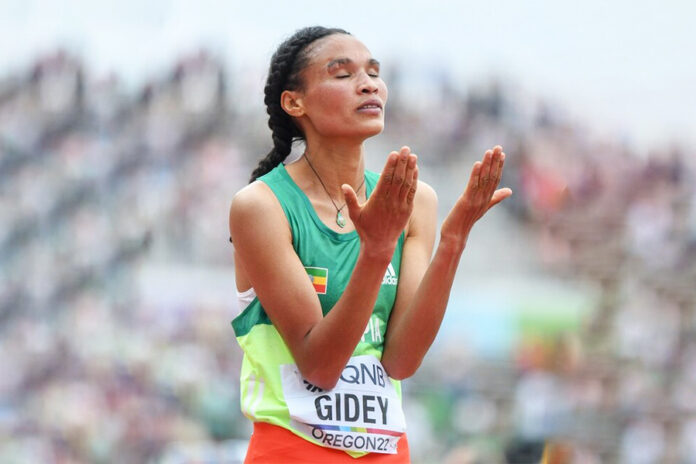 In 2003, when Great Britain’s Paula Radcliffe ran 2:15:25, the performance was considered off the scale. But that record stood for 16 years until 2019 when Kenyan Brigid Kosgei broke it in Chicago with her 2:14:04 running.
Ethiopian Tigist Assefa ran 2:15:37 followed by 28 year-old Kenyan Ruth Chepngetich’s astonishing 2:14:28 at Chicago on October 9th.
Regardless of how stunning these athletes are in their ability to run the marathon and half marathon, they will all be looking out for Ethiopian Letesenbet5 Gidey, who may just crush all distance records.
Letesenbet Gidey has run a mixed half marathon (men and women in the same race) in the time of 62:52 in Valencia in 2021. It is the world record. There is, however, a separate world record for women’s only race performances, and that one is currently held by Jepchirchir from the Gdynia.
Gidey’s half-marathon record carries a World Athletics points performance rating of 1281. Her 10,000m world record rating is much better at 29:01.03. At the Hengelo Diamond League meet she won, of course, and that performance is rated at 1303 points.
A 1303 performance in the half marathon is equal to a 61:53 for women. The marathon equivalent is 2:13:21.
Adding nine percent to Eluid Kepchoge’s record of 2:01:09 would put the women’s time at 2:13:05 a case of the women catching up to the men, this time; or one particular unusually great male marathon runner.