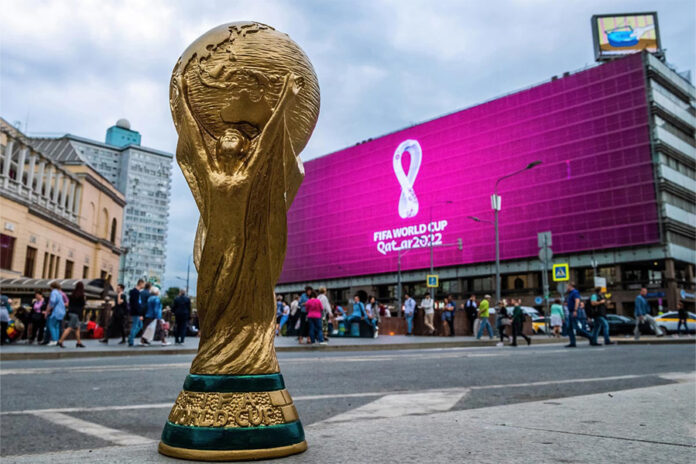 The World Cup kicks-off on November 20 as Qatar take on Ecuador at the AlBayt Stadium in Al-Khor. The final will be held on December 18 at the Lusail stadium
Thirty-two teams will be competing to dethrone holders France, who won the 2018 World Cup in Russia, defeating Croatia 4-2 in the final.
This year’s World Cup is the first to be held in a Middle Eastern country. The tournament has been rescheduled to the northern hemisphere’s winter months to avoid the intense summer heat in Qatar.
Qatar, the smallest country to have hosted soccer’s global showpiece tournament, is preparing for an estimated 1.2 million visitors during the World Cup.
Thousands of fans are expected to stay in neighboring countries like tourism hub the United Arab Emirates and fly in to Doha for matches due to limited accommodation in Qatar.
Ahead of the World Cup, Qatar has faced intense criticism from human rights groups and media over its treatment of migrant workers.
A Guardian newspaper analysis in Feb. 2021 concluded 6,500 South Asian migrants had died in Qatar since 2010 and the International Labor Organization has said Qatar is not adequately reporting worker deaths.
A member of the World Cup organizing committee said last week that Qatar acknowledges gaps in its labor system but the tournament has allowed the country to make progress on issues related to workers’ rights.
World Cup holders France have a long list of injuries that coach Didier Deschamps must take into consideration over the next few days although the preliminary list is long enough to include players in a race against time to be fit for Qatar.
The number of players in the final World Cup squads has been increased by three from 23 to 26 for the tournament in Qatar.
FIFA said in June the decision to expand squads was made “given the need to retain additional flexibility due to the unique timing” of this year’s competition, which will interrupt the European club season.
Five FIFA World Cup underdog stories
The story of the FIFA World Cup replete with dazzling displays from gifted footballers has unfolded dramatically over the years. There have been heartaches and joy, upsets and surprises, a cauldron of every human emotion thrown in all manner of combinations, felt as much by the players as those witnessing them.
They are the grand tales, gladiatorial displays of effort, strength and discipline. But there are also herculean feats from the unheralded practitioners of the game and their gigantic Goliath-slaying acts.
So, to honor the little twists in the tale, we look back and celebrate the underdogs’ many dates with destiny.
USA 1-0 England; Group 2 league match; Belo Horizonte, Brazil – 1950
America, the new powerhouse at the world stage post World War II, showed its British friends little mercy when they landed for their first World Cup adventure in 1950. Team USA which included a mailman, a paint-stripper, a dish-washer and a hearse driver shocked England, which had an array of professional stars in its ranks.
Joe Gaetjens a Haitian dishwasher in New York scored the only goal of the game.
West Germany 3-2 Hungary; Final; Bern, Switzerland – 1954
It was the ‘Miracle of Bern’, when West Germany still struggling to recover from the social and economic implications of Nazi rule and World War II slay the till then undefeated Hungarian team, better known as the ‘Magical Magyars’.
Trailing by two goals within the first eight minutes of the game, West Germany leveled the score in the next 10 minutes, before Helmut Rahn found the winner in the 84th minute.
German historian Joachim Fest, writing eloquently, described the moment as the founding day of the German Republic: “It was a kind of liberation for the Germans from all the things that weighed down upon them after the Second World War. July 4, 1954 is in certain aspects the founding day of the German Republic.”
North Korea 1-0 Italy; Group 4, final league match; Middlesbrough, England – 1966
The diminutive North Koreans warmed the hearts of their English hosts when a strike three minutes from half time from Army Corporal Park Do-Ik handed the Asian nation an unlikely win over pedigreed Italy.
The Chollima (a mythical winged horse that cannot be mounted by a mortal, a symbol of the nation’s revolutionary zeal), in its quarterfinal against Portugal, raced to a 3-0 lead by the 25th minute, but a magical display from the tournament’s highest scorer, Eusebio, killed its dream.
Northern Ireland 1-0 Spain; Group 5, final league match; Valencia, Spain – 1982
“At the final whistle, we didn’t initially celebrate. We just looked at each other for about 10 seconds in amazement,” Northern Ireland midfielder Tommy Cassidy recalls.
The country, the smallest to ever qualify for the World Cup, shocked the host at the Mestalla. After a goalless first half, Gerry Armstrong, lurking in the box, made the most of a goalkeeping howler from Luis Arcanda, striking it hard and low past two defenders and the ’keeper.
Cameroon 1-0 Argentina; Group B, first league match; Milan, Italy – 1990
In the ‘Miracle of Milan’, defending champion Argentina was at the receiving end of a tough-tackling Cameroon side in the first match of the competition. “I got a kick from a guy against Cameroon that nearly took my head off,” Diego Maradona, Argentina’s inspirational captain, said later.