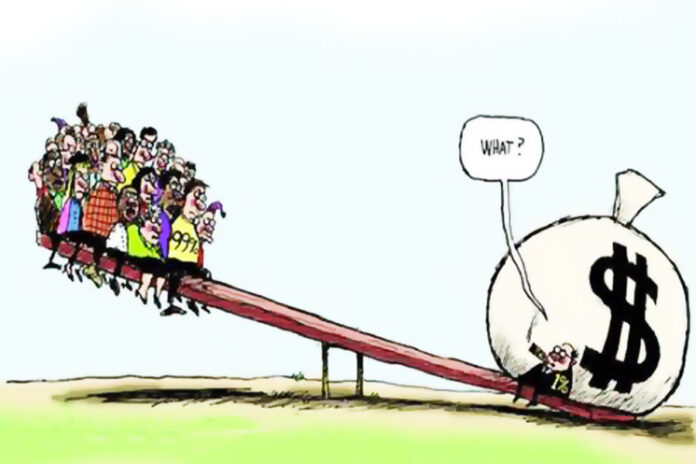 In the industrial regime of the 20th century, core economic activities effectively rested on the two major pillars of the system, namely labor and capital. To be sure, capital is nothing more than ‘dead labor’, but we will not go into that today. To a large extent, these two protagonists shaped the ideologies of the 20th century nation-states. In the socialist camp, countries like the USSR and China, with many other aspirants, tried new social formations along the values of labor. In the west, which was dominated by the logic of capital, the reaction to the rising radical tendency of eastern nations was to vigorously temper the excesses of capital. The result; ‘social democracy’ in the industrial west, including the USA. These opposing, yet searing orientations of the above two contenders, still reverberate in the 21st century.!
The 21st century economic problematic harbors, amongst many other intractable challenges, the very mechanism of income distribution. In other words, how to distribute income to the vast, but economically marginalized majority of the world system? With the advent of technology, the global economy has been moving towards the employment of less labor. As a result and unlike the 20th century, labor lost significant negotiating power vis-à-vis capital. In the western world today, the average working adult doesn’t earn enough to support a family life. She has to resort either to some kind of state assistance or try to do without a whole lot of things. Going into massive debt to sustain basic livelihood/lifestyles, without the remotest possibility of ever paying back the debts whole, has become another strategy for survival! Herein lies the crux of the matter: When both labor and capital get incessantly de-valorized, how is the global sheeple, (human mass) including asset owning urbanized plebs, going to survive? In the olden days the major contention between labor and capital was how to share the surplus that were accruing from general productive activities, mostly commodity production! Since then, automation, robotics and informatics conspired to devalue labor. In fact, when AI (artificial intelligence) becomes fully integrated into the global economy, things will get even worse, particularly for physical labor!
In earlier times plenty of institutions were set up to facilitate the project of commodity production, industrial or otherwise. The effort was supported by both labor and capital. Training skilled labor for the economy was the driving force behind the modern education system that was put in place in the 20th century. Putting resources to this end was also supported by capital. A word of caution is in order. Do not confuse this project of the mills (educational institutions) with that of genuine enlightenment. Obviously, the status quo intentionally wants to muddy the water when it comes to these two qualitatively separate undertakings, so that it can get away with murder, so to speak. Today, the ethos of enlightenment is being approximated by such initiatives as ‘home schooling.’ The status quo’s purpose of public schooling still remains the creation of effective human drones. And this is ‘indoctrination’ pure and simple! Be that as it may, finding jobs in economies where technology increasingly takes over the functions of human labor is not going to be easy. Subsequently the dilemma arises; if people can’t find meaningful occupation with commensurate remuneration, how are they going to purchase stuff produced by non-humans? For whom are the commodities intended in the first place?
It is not only labor that is in a fix, so to speak. Capital is also becoming superfluous. For instance, finance capital used to set its own terms for its own use. Interest rates were one way of measuring the cost of capital. Yet today, there are over $17 trillions worth of bonds in the world with negative yields, i.e., negative interest rates! Just like labor’s precarious predicament, capital’s position in late modernity is also in a pickle. To avoid the impending calamity of capital’s massive devalorization, the managers of globalization are enacting various policies. Liberalization, deregulation and privatizations are aggressively pushed by the neoliberal institutions of the world system in order to find viable outlets to the glut of capital that is threatening to burst at the seams! The phenomenon of asset inflation, whose scale and breadth is unseen and unheard in all of human societal history, has taken root across the world. We believe such abnormalities are harbingers of things to come. We believe, the fraudulent global system of ‘fractional reserve banking’, based on ‘fiat’ currencies, might well be on life support system. No wonder central banks of various countries are feverishly hording precious metals (as reserves).
‘Universal Basic Income’ is one proposal that is being looked at, rather carefully, by Nordic countries. UBI’s main objective is to try to ameliorate labor’s position in the aforementioned new realities that have skewed the traditional mechanisms of income distribution. As the modern world’s structural crisis deepens, the dilemma of availing purchasing power to the general sheeple is bound to impose serious problems.
This was first published in 2019