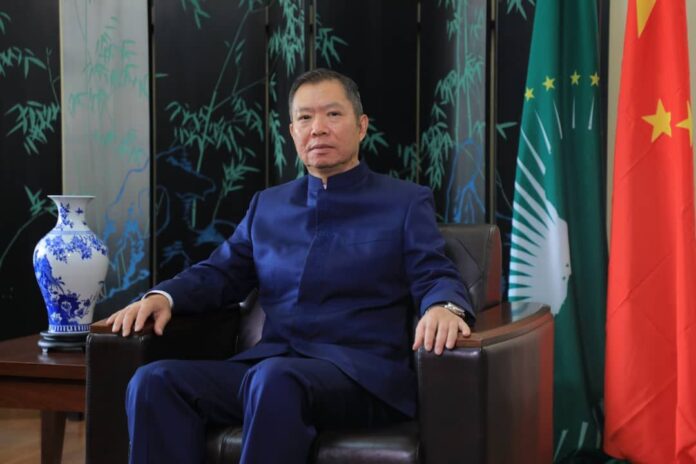 By Amb. HU Changchun, Head of Mission of China to the African Union

Not long ago, the 20th National Congress of the Communist Party of China came to a successful conclusion. It took place at a critical time when China embarks on a new journey to build a modern socialist country in all respects and advance toward the second centenary goal. The Congress clarified that the central task of the CPC will be to lead the Chinese people of all ethnic groups in a concerted effort to advance the rejuvenation of the Chinese nation on all fronts through a Chinese path to modernization. The Congress elaborates that the Chinese path to modernization is the modernization of a huge population, of common prosperity for all, of material and cultural-ethical advancement, of harmony between humanity and nature, and of peaceful development, providing a scientific and effective path for China’s development, as well as useful references for human progress.

The 20th National Congress of the CPC has attracted widespread attention from the African Union and all fields in Africa. African friends have expressed in various ways their best wishes to China’s development and China-Africa cooperation. African leaders have sent letters, warmly welcoming the successful convening of the Congress, congratulating H.E. Xi Jinping on the re-election as General Secretary of the Central Committee of the CPC, and wishing the Chinese people great achievements in the new era. The African side highly appreciates that the “Nine Programs” announced by President Xi Jinping at the FOCAC is a truly people-centered plan, and the African side is full of expectations for it. At the seminar on the 20th National Congress of the CPC held by the Chinese Mission to the African Union, Chinese and African officials, representatives and experts from think tanks, as well as financial institutions conducted lively and friendly exchanges on the significance of the Congress and the fruitful achievements of China-AU practical cooperation. They congratulated that the Congress opened a new chapter in China’s building of a great modern socialist country in all respects. They further commended the historic achievements of China would not have been possible without the leadership of the CPC, and China’s success has brought hope to the development and revitalization of African countries. The African side looks forward to the further enhancement of China-Africa relations.

Thanks to the unremitting and concerted efforts of both China and Africa, the China-Africa community with a shared future has become a model for building a community with a shared future for mankind. Shortly after the conclusion of the 20th National Congress of the CPC, President Xi Jinping received Tanzanian President Samia Suluhu Hassan in Beijing who was paying a state visit to China, which fully demonstrated the importance attached to further deepening the China-Africa comprehensive  strategic and cooperative partnership. China always holds the principle of sincerity, real results, amity and good faith and pursuing the greater good and shared interests to conduct cooperation with Africa in solidarity for common development. This is determined by the nature and mission of the CPC to seek rejuvenation for the Chinese nation and progress for mankind. China has been Africa’s largest trading partner for 13 consecutive years. The Forum on China-Africa Cooperation has been held for 8 times, and practical fruitful cooperation results have spread all over the African continent. More than 3,500 Chinese enterprises operating in Africa have promoted a large number of cooperation projects, created millions of job opportunities, and contributed to the economic and social development of Africa.

This year marks the 20th anniversary of the founding of the AU and the establishment of diplomatic relations between China and the AU. Over the past 20 years, the AU has made remarkable achievements in leading Africa seeking strength through unity, development, revitalization and integration. This year, President Xi Jinping sent a congratulatory message to the 35th AU Assembly and exchanged congratulatory messages with rotating Chairperson of the AU on the 20th anniversary of the establishment of China-AU diplomatic relations, demonstrating the high level of political mutual trust between China and Africa. No matter how the international situation evolved, China and Africa have always supported each other firmly on issues concerning each other’s core concerns and major interests. The China-aided Africa CDC headquarters building project will be delivered early next year, which will give a strong boost to the development of healthcare in Africa. China and AU have established a coordination mechanism for Belt and Road Initiative Cooperation. China actively supports the building of the African Continental Free Trade Area, and promotes China-AU cooperation in infrastructure, energy, digital economy, agriculture and other areas. China and the AU Commission successfully co-organized the “Talk with Taikonauts” event, during which Chinese astronauts connected with African youth from outer space for the first time, demonstrating the firm will of China and Africa to jointly reach new heights in science and technology. China-AU relations play an important guiding role in carrying forward the traditional China-Africa friendship and strengthening the solidarity and cooperation in the new era.

China’s new journey brings new opportunities to the Africa. The 20th National Congress of the CPC has made clear that China will continue to firmly pursue a win-win strategy of opening-up and provide the world with new opportunities and people with greater benefits through Chinese path to modernization. Under the guidance of the Congress, China will carry forward its traditional friendship with Africa, give full play to the leading role of China-AU cooperation, strengthen the alignment of China’s development strategy with AU Agenda 2063 and the development strategies of African countries. We will work to jointly achieve high-quality cooperation and development on a larger scale and at a higher level, to make sure the dividends and fruitful results of China-Africa cooperation bring more benefits to the people of both sides, inject new impetus and make new contribution to the building of a China-Africa community with a shared future in the new era!