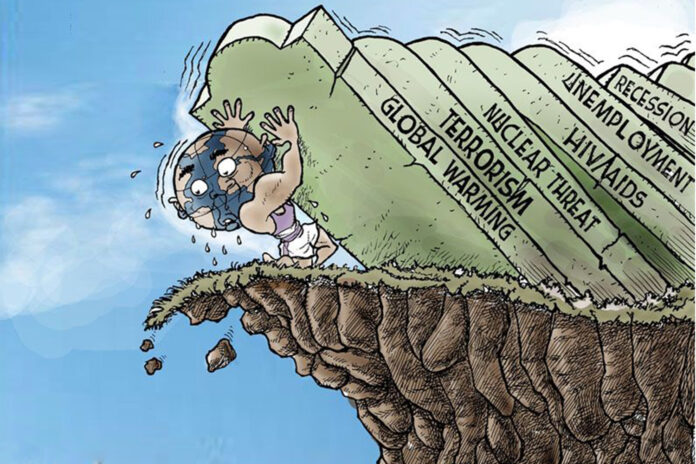 With few exceptions, the majority of humans are endowed with a somewhat balanced emotional and cognitive disposition. Fear, as a primordial element, is part and parcel of our nature. Avoiding fear completely is not a possibility, at least in the case of the majority. Only the bona fide psychopaths can lead their lives without hardly any fear. In fact, when in company of other normal beings (over 90%), psychopaths tend to fake fear and other emotions (empathy, sadness, etc.) with an intention to joining the ‘fearing herd’, i.e., the larger human community! There are enough scientific data to suggest chronic psychopaths who suffer from all sorts of emotional/cognitive imbalances tend to be more ‘fearless’ than others. As a result, they are instinctly pulled to dangerous/confrontational situations; their undeveloped sense of fear leaves them at a disadvantage. In other words, psychopaths are without a built-in restraining mechanism, which has been honed throughout the eons, to help avoid unnecessary violent engagements/activities!
In short, psychopaths are anti-social. When such characters occupy the pinnacles of human institutions, be it within the state or outside of it, society is bound to suffer grave consequences. Wars are just one example perpetrated by power hungry psychopaths. Despite this anomaly of the mentally sick, fear is what defines us as humans along with other animals. In the domain of the Homo sapiens, rational thinking has been modulating fear throughout the ages. Other animals still fear fire, for example. On the other hand, we do not fear typhoons or hurricanes as in the old days, but still are wary of them. Science/technology (satellite, etc.) has managed to track and even predict the trajectory as well as hurricane’s landfall (to a large extent). Even though we are helpless in stopping hurricane’s devastating effects, prior knowledge of their general ferocity and directions have given us a sort of solace. At the same time and unlike wild fires, we don’t even attempt to stop hurricanes. In this case we humbly acknowledge our limits. On the other hand, various epidemics/pandemics like polio, smallpox, yellow fever, etc., (viruses), cholera (bacteria), etc. have been conquered, at least for the time being. At one time these pestilences did induce wide spread (rational) fear within the human community. Today, our fears of such diseases are somewhat tempered, thanks to advances in medicine. There are plenty of examples to show our fears are inversely related to our knowledge, i.e., the more we know the less we fear! Naturally, what we do not understand can still steer fear in us!
Besides the collective fear we all experience as a species, triggered by the likes of the above examples, individuals can face situations that can potentially induce (irrational) fear in them. Phobia, PTSD, etc., arise mostly as consequences of undesirable experiences encountered by individuals. Moreover, one can infer, from experience, the existence of a ‘fear threshold’, so to speak. The ‘fear threshold’ can differ from one individual to another, depending on age, gender, experience, etc. At the end of the day, it is these shared frailties that make us humans! But when fear is systemically induced and intentionally imposed on all humanity by the power that be, the whole project must be suspect. In fact, such a systematic act must be classified as ‘crime against humanity’! In addition, it is important to clarify and not confuse the ‘fearlessness’ of the psychopaths with that of bravery. The ‘fearlessness’ amongst the sick seems to be due to certain physical conditions in the brain. Since psychopaths are born without the faculties that allow them to experience fear like the majority of their human compatriots, they tend to be daring and this is often misconstrued as ‘bravery’. For instance, psychopathic politicos are very eager to declare war, but are not willing to fight it themselves. They also seem willing to pass harsh judgment on other fellow humans, while not willing to accept the same judgment when passed onto them! The Good Book (ten commandment) warned us about such unbecoming deed, labeling it a sin, thousands of years ago. Therefore, as far as psychopaths are concerned, they are above the law and the usual ‘rule and law’ doesn’t apply to them. It is such callous criminal attitude of psychopaths, who are now very much in control of global human affairs, that is disturbing enlightened humanity. Just look at the manifest gangsterism of not only the reigning hegemon, also its minion vassals and lackeys across the planet!
Nazi propaganda was quite effective in creating fear across the world. The mass psychosis thus created was unleashed on millions of unsuspecting citizens. Here are some of the fear-mongering strategies of the Third Reich that have an eerie resonance to the ways of the current deep state. In these collapsing days of the modern world order, Nazi or Fascistic strategies/teachings seem to have found receptive ears within the nation states corridors of power.