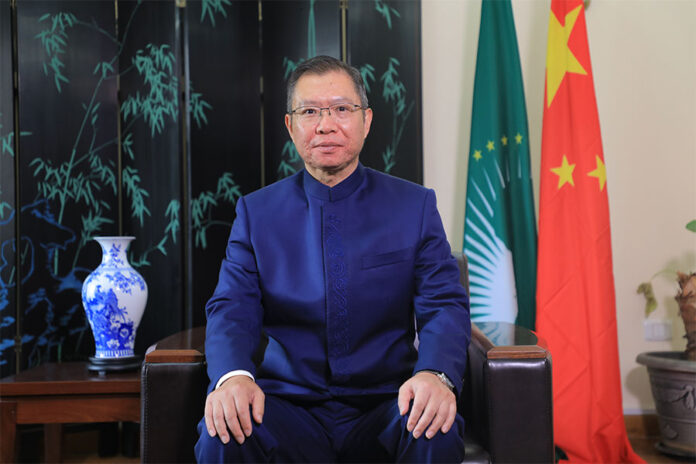 Ambassador Hu Changchun, Head of Mission of China to the African Union talked to Capital about the 20th National Congress of the Communist Party of China and the commitment to Africa. Excerpts;

Capital: What is the most important political achievement of the 20th National Congress of the Communist Party of China?

Ambassador Hu Changchun: The 20th National Congress of the Communist Party of China (CPC) took place at a critical time when China embarks on a new journey to build a modern socialist country in all respects and advances toward the second centenary goal. The most important political achievement of the Congress is the election of a new CPC Central Committee with Comrade Xi Jinping at its core, which further established General Secretary Xi Jinping’s core position in the CPC Central Committee and in the Party as a whole and the guiding role of Xi Jinping Thought on Socialism with Chinese Characteristics for a New Era. This fully reflects the common will of the Party and the Chinese people, and it is of decisive significance for the cause of the great rejuvenation of the Chinese nation.

Capital: How do you view China’s achievements and changes in the past decade?

Ambassador Hu Changchun: General Secretary Xi Jinping pointed out that in the past decade, China has experienced three major events of great immediate importance and far-reaching historical significance for the cause of the CPC and the people: the 100th anniversary of the founding of the CPC, the socialism with Chinese characteristics entering the new era, and the completion of the historical task of poverty alleviation and building a moderately prosperous society in all respects.

In the past decade, China’s economic aggregate and structure have undergone qualitative changes. Its status as the world’s second largest economy has been further consolidated and improved, and its scientific and technological strength and comprehensive national strength have also leapt to a new level. Compared with 2012, China’s GDP has increased from 54 trillion yuan to 114 trillion yuan, accounting for more than 18% of the global economy from 11.4%, and China’s contribution to world economic growth has remained at around 30%. China is the largest engine of global economic growth. China’s ranking in the Global Innovation Index rose from 34th to 11th. The average life expectancy has increased to 78.2 years, and nearly 100 million rural impoverished population have all been lifted out of poverty. The world’s largest education system, social security system, and medical and health system have been established. The ecological environment has also undergone historic, transformative and overall changes.

Capital: What is the secret of the Communist Party of China’s eternal vitality?

Ambassador Hu Changchun: One of the “secrets” of the CPC’s ability to maintain its vitality and strong leadership is that the it persists in integrating the basic principles of Marxism with China’s specific realities and fine traditional culture, so as to realize the sinicization and modernization of Marxism. Xi Jinping Thought on Socialism with Chinese Characteristics for a New Era is the latest achievement. The second “secret” is that since the birth of the CPC, it has established its original mission to seek happiness for the Chinese people and rejuvenation for the Chinese nation, and has always represented the fundamental interests of the overwhelming majority of the people. The third “secret” is that the Chinese Communists insist on promoting self-reform while maintaining integrity and innovation, and have the courage, mind and responsibility to turn the blade inward. This is a strong support for the party to maintain its youthful vitality. China has launched an unprecedented anti-corruption struggle in the past decade and achieved an overwhelming victory. On the new journey, we will also insist on promoting comprehensive and strict party governance.

Capital: What is the mission of the Communist Party of China in the new era?

Capital: The Report to the Congress put forward the concept of Chinese path to modernization. What is it?

Ambassador Hu Changchun: There is no set form of modernization or one-size-fits-all modernization standards in the world. Chinese path to modernization contains elements that are common to the modernization processes of all countries, but it is more characterized by features that are unique to the Chinese context. The features are: It is the modernization of a huge population, of common prosperity for all, of material and cultural-ethical advancement, of harmony between humanity and nature and of peaceful development.

Chinese path to modernization offers humanity a new choice for achieving modernization. It is a proposition on the diversity of mankind and an attitude of exchange and mutual learning among different civilizations and countries. The CPC is ready to exchange and learn from other political parties in the world, jointly enrich the path to modernization, and better bring happiness to its own people and people around the world. Also, China will never “export” the Chinese model or ask other countries to “copy” China’s practice. As President Xi Jinping said in his recent meeting with South African President Cyril Ramaphosa on the sidelines of the G20 Summit, “China supports South Africa in exploring a modernization path that suits its national conditions.” Every country’s efforts to independently explore a modernization path suited to its national conditions should be respected.

Capital: How do you view the statement in the Report to the Congress that “building a human community with a shared future is a way forward for all the world’s people”?

Ambassador Hu Changchun: China has always adhered to the foreign policy of safeguarding world peace and promoting common development, and is committed to building a human community with a shared future. This fully demonstrates the CPC’s determination and will to work tirelessly for the cause of human progress, and greatly enhances the confidence and strength of human society in pursuing a brighter future.

The Belt and Road Initiative proposed by China, one of the practical actions to promote a human community with a shared future, has become a popular international public good and platform for international cooperation. China has signed more than 200 Belt and Road cooperation documents with 149 countries and 32 international organizations. Not long ago, President Xi Jinping put forward the Global Development Initiative and the Global Security Initiative, which have injected new impetus into safeguarding world peace and promoting common development.

At present, the major changes and the pandemic unseen in a century are intertwined, the world economic recovery is struggling, regional conflicts and crises keep cropping up, and food, energy, climate and other issues keep rising. All these further demonstrate the truth of the concept of building a human community with a shared future. In the face of common threats and challenges, no country can cope with them alone or remain immune. Only by building a human community with a shared future, promoting the common values of all mankind and jointly addressing global challenges can security be safeguarded and prosperity be sustained.

Ambassador Hu Changchun: Adhering to the principles of “sincerity, real results, amity and good faith” and“pursuing greater good and shared interests”, China is committed to strengthening solidarity and cooperation with other developing countries, including African countries, and safeguarding our common interests. This year, President Xi Jinping sent a congratulatory message to the 35th African Union Assembly and exchanged congratulatory messages with Chairperson of the African Union and Senegalese President Macky Sall on the 20th anniversary of the establishment of China-AU diplomatic relations, demonstrating the high degree of political mutual trust between China and Africa. During President Xi Jinping’s meeting with President Sall on the sidelines of the G20 Summit, Sall spoke highly of the high-quality mutual trust and high-level relations between Africa and China as China is the first country to openly support the AU to join the G20. With the implementation of the outcomes of the Eighth Ministerial Meeting of FOCAC, new achievements have been made in the “Nine Projects”, deepening China-Africa friendly relations.

The Report shows that China is committed to the basic state policy of opening-up, firmly pursues a win-win strategy of opening-up, and continues to provide new opportunities for the world with China’s new development. The AU is about to launch the second ten-year plan of Agenda 2063. Under the new situation, China-Africa cooperation is embracing new opportunities. We stand ready to work closely with AU institutions to implement the important consensus reached by China and AU leaders, strengthen strategic consultation and coordination, promote friendly exchanges in all fields and at all levels, consolidate and deepen political mutual trust between China and Africa, uphold and practice true multilateralism, jointly build the Belt and Road Initiative, advance the Global Development Initiative, and accelerate the implementation of the UN 2030 Agenda for Sustainable Development. We will make new contributions to the building of a China-Africa community with a shared future in the new era.

Capital: Recently, the 17th G20 Heads of State and Government Summit was held. The theme of this summit is “Recover Together, Recover Stronger”. China’s attendance has attracted much attention from the public. What’s your opinion on this?

Ambassador Hu Changchun: Recently, President Xi Jinping attended the 17th G20 Summit in Indonesia and the 29th APEC Economic Leaders’ Meeting in Thailand. During this visit, President Xi Jinping delivered important speeches at multilateral and bilateral meetings with leaders of other countries, telling the story of the 20th CPC National Congress, the story of Chinese path to modernization and the story of win-win cooperation between China and the rest of the world in a systematic, in-depth and insightful manner, looking forward to the bright prospect of China’s high-quality development and high-level opening-up, sending a strong signal that China will continue to promote world peace and development and deepen opening-up and cooperation.

This year, the global geopolitical and economic situation has been under constant pressure. At the G20 meeting, President Xi Jinping put forward China’s proposal, calling on all countries to foster a sense of a human community with a shared future, advocate peace, development, cooperation and win-win results, let unity replace division, cooperation replace confrontation and inclusiveness replace exclusivity, and promote more inclusive, beneficial and resilient global development. He made clear that the prosperity and stability of the world cannot be built on the basis of the poor getting poorer and the rich getting richer. Modernization is not the prerogative of any country, and countries that take the lead should sincerely help other countries develop. President Xi Jinping has always had developing countries in mind, implemented the community vision of “common development is true development” in his diplomatic actions. He also put forward building a global partnership for economic recovery and the International Cooperation Initiative on Global Food Security, and explicitly supported the AU to join the G20.

G20 Bali Leaders’ Declaration reflects the consensus of all parties and major outcomes of cooperation, and incorporates China’s important ideas and propositions in international economic cooperation. The list of G20 practical cooperation projects includes 15 cooperation projects and initiatives proposed by China, which fully demonstrates China’s support for multilateralism and contribution to G20 cooperation. International public opinion believes that in the face of a severe and complex international situation and major challenges to human development, China once again called for solidarity and cooperation, put forward a global governance plan with strategic vision, played a constructive role in promoting the success of the conference, and reflected China’s open, proactive attitude and rational and inclusive image.