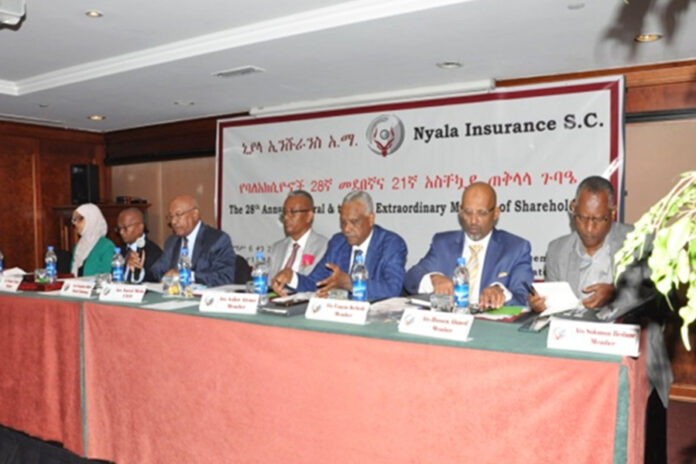 To raise the paid-up capital to 2.5 Billion birr

Nyala Insurance S.C. (NISCO) disclosed that it has recorded a gross profit of Birr 263 million from its general and long-term insurance operations, an all time high and an increase of 36.1 per cent compared to the previous fiscal year.
The shareholders have also unanimously agreed Birr 126 million to be retained from the net profit in order to increase the paid-up capital of the company to over Birr 830 million, and decided to further raise the paid-up capital to Birr 2 billion and 500 million within the next five years!
During his presentation on the company’s annual performance report to the company’s shareholders who attended the 28th General and the 21st Extra Ordinary General Meeting held at Sheraton Addis on 15th December 2022, Getachew Birbo, the Chairman of the Board of Directors, said that despite sharper economic slowdowns along with cost of living crisis, NISCO has realized remarkable achievements as compared against the preceding fiscal year, 2020/21. According to the chairman’s report, the underwriting surplus generated from the general insurance businesses has surpassed Birr 196.2 million, showing a total growth of 22.2 per cent as weighed against the preceding achievements.
Similarly, the chairman underscored that NISCO also registered a 64.9 per cent growth in its long-term (life and health) insurance business and thereby secured Birr 186.2 million, and added the total asset of the company stood at Birr 3 billion, an increase of 21.1 per cent over the previous fiscal year.
On the other hand, the net claims of the company slightly increased from about Birr 175.3 million to Birr 183.1 million, mainly due to an increase in motor insurance claim costs, he outlined.
The chairman added that the reasons for the remarkable achievements in the premium income were due to the company’s prudent underwriting practices, implementation of new business innovations based on the customers’ need assessments.
Yared Mola, the Chief Executive Officer of Nyala Insurance S.C., on his part underlined that Nyala Insurance has scored remarkable achievements by implementing prudent underwriting and risk management schemes, availing new insurance products based on customers’ need and demands, and other important business strategies.
He also added that NISCO is exerting utmost efforts to be accessible to the digital natives within short period of time.
According to the CEO, NISCO is further ready to avail its products and services based on revamped business philosophies of profitable growth, insure-tech and digitalization, customer centricity, operational excellence and the blue move initiatives.
Established in 1995 with a paid-up capital of Birr 7 million, NISCO has contributed three new insurance products to the Ethiopian insurance market: namely, ለ-Mobiሌ (a mobile devices insurance plan), Diaspora Special Insurance and International Health Insurance (which covers up to one million USD costs of medical services) including medical evacuation and air ambulance services.