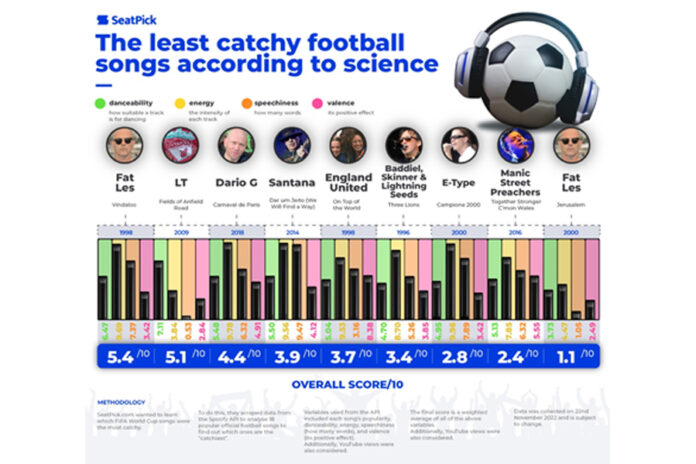 An estimated 12,000 monthly searches for ‘Football songs’ are done globally, according to Google keyword data. Who can forget Shakira’s iconic Waka Waka and KNAAN’s Wavin’ Flag? What makes these songs so memorable that we play them each time a football tournament is on?
The experts at SeatPick tested this by scraping data from Spotify’s API and YouTube views to find the catchiest football anthems. They measured how catchy each track is by how danceable and energetic it is, its ‘speechiness’ level (the number of spoken words), and its valence (how positive the track is).
This release is part of a wider study. If you’re interested in seeing the study in more detail, please see the blog post.
Waka Waka crowned the most catchy and danceable football song
Science has spoken, and SeatPick can officially reveal that the catchiest World Cup song is Shakira’s Waka Waka (This Time for Africa). It earned a total catchiness score of 8.4/10 based on factors such as its popularity, danceability, and energy.
It is also the most danceable football song, scoring 7.66/10, this is due to its high tempo and beat-driven melody. Additionally, it scored 79/100 for popularity, which is true as the music video has been viewed over 3.3 BILLION times on YouTube! To this day, the track has received over 15 million downloads and was the seventh most popular song of 2010.
And although Waka Waka’s beat is catchy, its lyrics are extremely catchy too, and they are repeated numerous times in each chorus. No wonder it earned the title of the catchiest song…
A study conducted by Nunes, Ordanini, and Valsesia (2014) for the Marshall School For Business helps support Cohen’s comments. They analysed 55 years’ worth of Billboard Hot 100 hits and concluded that the use of repetitive lyrics in popular songs was a major factor in helping them achieve higher chart success in a quicker time frame. *
Hayya Hayya is in close second
Ranking second place is Trinidad Cardona’s Hayya Hayya (Better Together) which scored 6.9/10. Released as the first single from this year’s official World Cup soundtrack, Hayya Hayya is an upbeat track with an infectious R&B groove, earning it its high danceability and energy scores. Despite only being released in April, this track’s high placement in the results suggests it may become a World Cup classic in years to come.
Ricky Martin ranks third
Ricky Martin’s La Copa de la Vida takes the third spot with a catchiness score of 6.5/10. The Samba-tinged anthem released for the 1998 World Cup was rated high due to its danceability and energy and the music video has since seen 78 MILLION YouTube views.
The song also topped the charts in 14 countries including host country France, where it sold over 500,000 copies and has been considered one of the best World Cup anthems by multiple publications, including Billboard.
Pitbull is at #4
In fourth place is Pitbull’s We Are One (Ole Ola) featuring Jennifer Lopez and Brazilian pop star Claudia Leitte, earning a total catchiness score of 6.5/10. Released in tandem with the 2014 World Cup hosted by Brazil, who can forget this catchy anthem laced with a Latin beat?
The song has grossed over 862 MILLION YouTube views, (the second highest in our results) and it ranks slightly higher than Waka Waka for its energy, which is down to its rhythm and fast-paced sound. We Are One peaked at #1 in Belgium, Hungary, and Switzerland, and has been certified Gold and Platinum in countries including the US, Belgium, Spain, and Mexico.
Wavin’ Flag vs, We Are the People
Fighting for fifth place with a score of 5.9/10 are KNAAN’s Wavin’ Flag and Martin Garrix’s We Are the People, and both tracks are equally symbolic of the World Cup.
Wavin’ Flag was also a pinnacle moment of South Africa’s 2010 World Cup. It’s catchy dance beat helped it earn a high danceability score. We’re sure this contributed to its 420 MILLION YouTube views, and top ten placement in over twenty charts across the globe as well as numerous streaming service playlists.
We Are the People, performed by Martin Garrix, U2 frontman Bono and The Edge was released for the Euro 2020 Championship. An uplifting anthem with a high-energy final chorus, it received high popularity, danceability, and energy scores, as well as over 31 MILLION YouTube views.
Three Lions are at the bottom of the table
Nearing the bottom position at #15 and scoring 3.4/10 is Euro 96 anthem Three Lions, by Baddiel, Skinner & The Lightning Seeds. A surprising result, since it’s considered a staple of British football culture, but it has earned an impressive 42 MILLION YouTube views, the sixth-highest viewed video in our results to do this.
Three Lions is a high-energy song, scoring 8.7/10. As well, a festive version was re-recorded for this year’s World Cup, so although statistically it may not be a catchy song, its cult classic status shows that it is easily memorable amongst fans and the public.
Other tracks in the results include New Order’s World in Motion, Nelly Furtado’s Força, and E-Type’s Campione 2000.
Tracks that have become unofficial World Cup or Euro songs such as ‘Sweet Caroline’ were still included in the study but didn’t receive high enough scores to be featured in the top 15 results.

Cultural artifacts the British Empire took from other nations, from the Maqdala Manuscripts to the Koh-i-Noor diamond