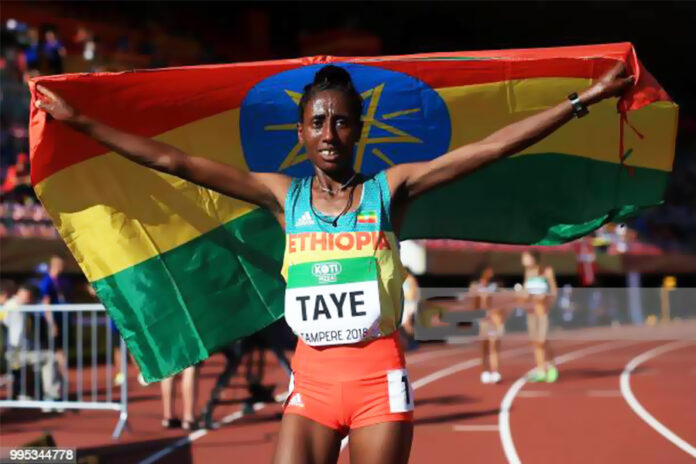 Ejgayehu Taye came within two seconds of the world 5km record she set two years ago at the Cursa dels Nassos, while Adisu Girma made it an Ethiopian double at the World Athletics Label road event in Barcelona.
Paced by Latvia’s Dmitrijs Serjogins, 22-year-old Ethiopian Ejegayehu went through the opening kilometre in a swift 2:49, well on schedule to challenge her own world record of 14:19 she set exactly one year ago at the same venue.
Ejegayehu , the world indoor 3000m bronze medalist, was timed at 7:04 at halfway, well inside the world record pace, and 8:33 at 3km while Klosterhalfen was 10 seconds in arrears by then.
Ejegayehu, who was fifth over 5000m at the Olympic Games, slowed slightly during the fourth kilometre to clock 11:29 at 4km and then desperately tried to find another gear in the final kilometre to revise her own world record. She crossed the line in 14:21, the second-fastest 5km performance in history and just two seconds off her world record.
Klosterhalfen was a distant second, 31 seconds adrift in 14:52, eight seconds outside the European record but gaining revenge on third placed Groval, timed at 15:06.
“Maybe I went off too fast and I finally could not maintain the required pace to break the record but anyway I’m satisfied as it’s a great performance,” said Taye, who has a 5000m track PB of 14:12.98 and who finished sixth over 10,000m at the World Championships in Oregon. “I’ll run next in the Valencia 10K in a couple of weeks’ time.”