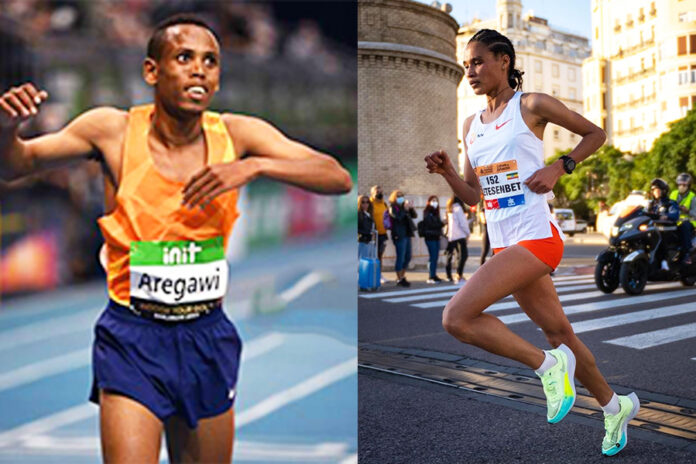 World 10,000m champion Letesenbet Gidey and 2021 Diamond League champion Berihu Aregawi won the hotly contested senior races at the Jan Meda Cross Country in Sululta.
With this event doubling as Ethiopia’s trial race for the World Athletics Cross Country Championships Bathurst 23, Gidey’s and Aregawi’s victories secured their places on the team for the global event on 18 February.
As has been the case for the past two editions, this year’s event was held in Sululta – about an hour away from Addis Ababa – instead of at the Jan Meda Race Course in the Ethiopian capital.
Letesenbet moved up into second place after passing through the third of five two-kilometer laps, but Gebreselama continued to lead as the pack started to get strung out. As they embarked on the final lap, the leading six women had made a break from the rest of the pack, but Gidey still appeared to be biding her time behind long-time leader Gebreselama.
With just under one kilometre remaining, Gidey – the world 5000m and 10,000m record-holder – edged into the lead and moved up a gear, opening up a significant gap on her opponents within a short space of time. The two-time world U20 cross-country champion continued to pull away from her pursuers in the closing stages to cross the finish line in 35:22.
Gete Alemayehu, the defending champion, was a distant runner-up in 35:41. Mekides Abebe produced a last-ditch sprint to finish third place in 35:47.
Aregawi, no stranger to long sustained solo efforts on the track cruised through the final lap and crossed the finish line in 30:45, winning by nine seconds from third place Worku.