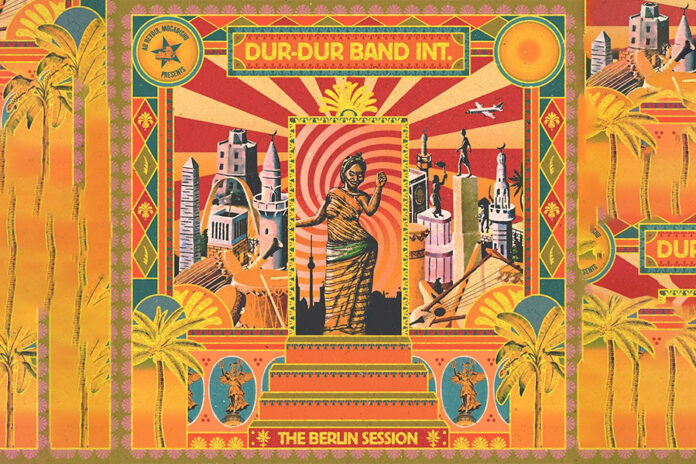 At the beginning of the 1990s, the glamorous discos and beachfront stages of Mogadishu disappeared as the city was bombed to the ground during the Civil War. Somalia’s musical stars went into exile throughout the globe. Many ended up in London, now home to the largest Somali diaspora in Europe. That is where Dur-Dur Band Int., a powerhouse of Somali live music, was founded and remains based today.
In the last decade many early recordings of Somalia’s Funk, Soul and Disco scene have been reissued, finding their way into the vinyl collections of music fans outside the Somali community, as well as radio and streaming playlists. But this record is different. ‘The Berlin Session’ by Dur-Dur Band Int. is not a reissue; it is the first new studio recording by a full group from Somalia since the country’s golden era of music ended three decades ago.
‘The Berlin Session’ captures a historic reunion which took place in Germany’s capital in 2019: Dur-Dur Band Int. together with legendary singers Xabiib Sharaabi (who lives in exile in Sweden), Cabdinuur Alaale (from Djibouti) and London-based Fadumina Hilowle. Previously heard on reissues such as the Grammy-nominated compilation ‘Sweet As Broken Dates’, these are living representatives of a distinct era. There may be over three decades between the original and new recordings but ‘The Berlin Session’ is proof that Somali music is hot, funky and alive – again.
“Duurka” is the first single and video to be released from the album. It features lead vocals by Xabiib Sharaabi who wrote the song in the early 80s. “Duurka” means “The Jungle” (extracts: “she left me in the jungle and I can’t find my way back, I am so much I love with her but she never cares for me.”). The war in his homeland of Somalia had sent Xabiib Sharaabi into exile and anonymity, stranded and estranged in Sweden. For Xabiib – nicknamed the “Somali King of Pop” in the 1980s for his body language and magnetising voice – the glamour of stardom had been replaced with an occasional wedding performance, singing alongside a backing track. “Duurka” brings back the vibes and good times from Somalia’s heydays, full of spirit, joy and hope.